I delivered the opening keynote on Shaping the Future of Business and also a workshop on Building and Implementing an Innovation Strategy.

Since it was a brief workshop to cover a very big topic I shared an Innovation Strategy Cheat Sheet with attendees, shown below, and as an interactive workshop took them through the issues they need to consider in creating an effective innovation strategy. Click here or on the image below to download the full page pdf.
END_OF_DOCUMENT_TOKEN_TO_BE_REPLACED

Recently more evidence has emerged to support this.
END_OF_DOCUMENT_TOKEN_TO_BE_REPLACED

I have a problem. I find it extraordinarily difficult to be focused.

The delight and enticement of all the possibilities of a rapidly evolving world are irresistible to me.

Pushing back at the startup mantra of focus

Having spent many years ensconced in startup communities I have heard over and over again the mantra of Focus Focus Focus.
END_OF_DOCUMENT_TOKEN_TO_BE_REPLACED

Last week I ran a three-day strategy workshop in Dubai for a group of senior executives who are marked as the next generation of leaders in a global professional services firm.

The heart of the workshop used scenario thinking to broaden their perspectives on change and strategic opportunity in their industry. We also wanted to provide a useful framework for the executives to develop and implement effective strategies for their respective country operations.

I was not able to find any strategy frameworks that were sufficiently relevant and pragmatic, so created a summary framework designed to be useful to any executives or entrepreneurs who need to develop practical, actionable strategies. I distilled the approaches and frames I have been successfully using for facilitating strategy development over the years with many executive groups, bringing it together into a succinct 6-step guide.

See below the diagram for a detailed explanation of the framework. 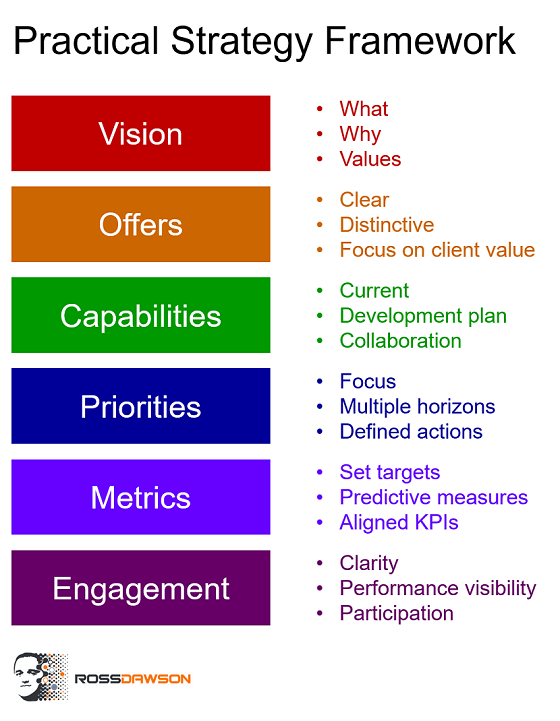 END_OF_DOCUMENT_TOKEN_TO_BE_REPLACED

I recently did a media briefing for Telstra Business on why small and mid-sized businesses need to adopt relevant technologies to keep pace with a rapidly changing business environment. One of the interviews I did after the briefing was with Kochie’s Business Builders.

The two short videos below were excerpted from the interview, with summary notes below.

END_OF_DOCUMENT_TOKEN_TO_BE_REPLACED

I was recently interviewed for a podcast on The Future of IT for Cisco’s Connected Futures program, along with leading CTOs, CDOs and technology strategists.

You can listen to the podcast below.

Points I make in the podcast on the role of CIO and technology leadership include:
END_OF_DOCUMENT_TOKEN_TO_BE_REPLACED

Let’s turn wants into wows. Let’s make the desire of individuals and companies to stand out and change the world a reality. Let’s prepare now for an extraordinary future.

These themes were explored by leading futurist Ross Dawson in his keynote at the 2016 Ericsson Services Forum in Mumbai. Dawson’s talk related to the event theme of “Turning Wants into Wows” by discussing how organizations can create value in a connected world through harnessing the power of networks, consumer expectations, integrated systems, and unique branding. The full keynote is shown in the video below.

Here are four key insights drawn from Dawson’s keynote at the forum.
END_OF_DOCUMENT_TOKEN_TO_BE_REPLACED

During Australian Healthcare Week on March 15-17, I will be delivering two keynotes on the future of healthcare, at the Health Facilities Design & Development conference and the Healthcare Efficiency Through Technology conference.

In the lead-up to the conference, an article Healthcare 2020: what will the future of healthcare look like in Australia? draws on an interview with me to explore this space. Below are just a few excerpted quotes from the extensive interview with me:

On big data and data sharing

END_OF_DOCUMENT_TOKEN_TO_BE_REPLACED

A few days ago I attended the launch event of Reinvent Australia, organized by Annalie Killian of Amplify Festival at PwC’s Sydney offices. It was a very interesting event, digging into the issues of how we can bring together many people’s ideas to create better futures for nations.

Graham Kenny, President of Reinvent Australia, described the organisation as a collaborative initiative to create a conversation on a shared vision for the nation. The bottom line of its endeavors is to increase the quality of life for all Australians, by influencing government and business in how they work.

As other futurists, I’ve had done quite a few media interviews recently on Back to the Future 2, which was set on October 21, 2015.

One of the most interesting broader issues around the film is very simply the degree of interest people have in the film, which captured people’s imaginations about the future, even though it was primarily a comedy.

ABC’s 7:30 Report on Wednesday ran a segment on Back to the Future 2 and tweeted this quote from me: 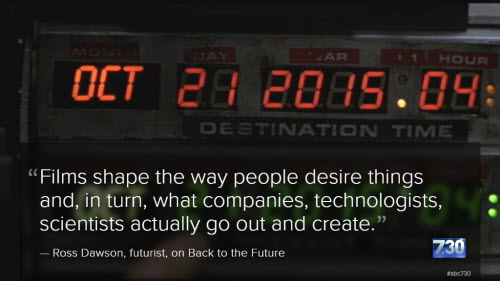 In a syndicated piece by AFP on Back to the Future and in an earlier article in Newsweek I made the same point:

Countless technology innovators have said how they were inspired by William Gibson’s Neuromancer and Neal Stephenson’s Snow Crash to create essential elements of the connected world we know today.

Science fiction in movies and books has shaped what we desire, as well as what we fear. It is a critical driving force in helping us shape our future, as it uncovers what we want to happen and don’t want to happen. Let us celebrate all science fiction, from the most serious to light-hearted comedy.