Recently more evidence has emerged to support this.

A recent Wall Street Journal article The Problem With Innovation: The Biggest Companies Are Hogging All the Gains draws on a rich array of research and case studies to highlight the issue.

Lately, economists have discovered an unsettling phenomenon: While top companies are getting more productive, gains are stalling for everyone else. And the gap between the two is widening, with globalization and new technology delivering outsize rewards to the titans of the global economy.

“Whatever good stuff is happening at the high end is not diffusing down to the tail,” says Andrew Haldane, chief economist at the Bank of England.

Some of the reasons cited for the slowing diffusion of productivity gains include automation, scale, intellectual property protection, and a concentration of talent at the best firms.

Adding to the case, last week Wall Street Journal followed up with a piece Why Do the Biggest Companies Keep Getting Bigger? It’s How They Spend on Tech, providing an additional angle on the increasing performance gap.

Your suspicions are correct: The biggest companies in every field are pulling away from their peers faster than ever, sucking up the lion’s share of revenue, profits and productivity gains.

But new data suggests that the secret of the success of the Amazons, Googles and Facebook s of the world—not to mention the Walmart s, CVSes and UPSes before them—is how much they invest in their own technology. 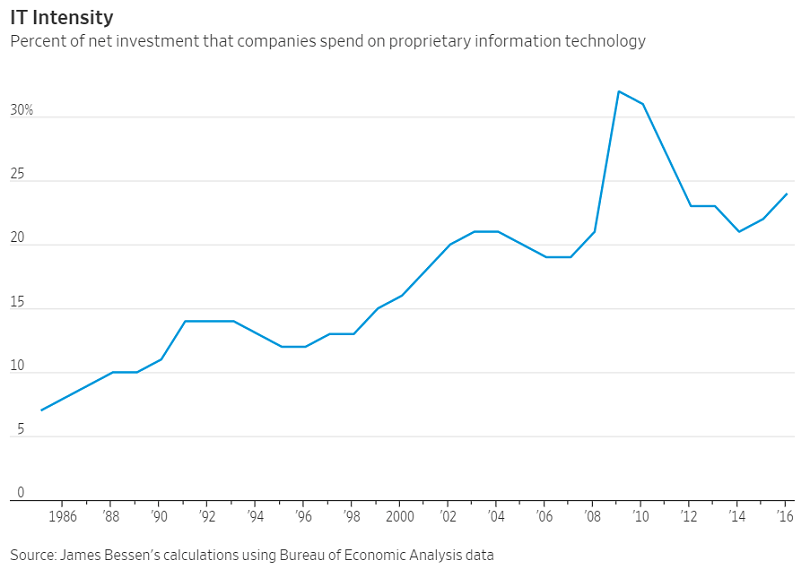 The article digs into similar research to the previous article, though focuses on size and investment in proprietary technology as the key differentiator.

While scale is a significant factor, notably in technology, it remains there are a number of factors driving the divergence in performance. These could be most aptly summarized as “innovation”.

In essence, the most innovative companies own the future. The rest will be left behind.

Will newspapers still exist in Australia in 2022? This morning their demise...

How we should be thinking about virtual reality and “techno-sex”...
Scroll to top
This website or its third-party tools use cookies to improve user experience and track affiliate sales. To learn more about why we need to use cookies, please refer to the Privacy Policy.