This will be given to attendees at the Future of Media Summit 2008 next week in beautiful glossy print format to take home. If for some reason you are NOT attending the Summit, you’ll have to settle for a digital version with small print-outs of the spreads (unless you happen to have a large-format printer handy…) :-)

This year we’ve taken a slightly different approach, moving away from providing statistics, and focusing on developing three frameworks to help people think about the future of media and engage in constructive conversations at the Summit. We’ve always found we get a fantastic response to our frameworks, so we focused on this as a way to create value with the report. 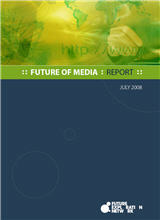 A quick overview of the report contents:

An introduction to the report. The full text is at the bottom of this post.

Contains our prediction that the global media and entertainment market will grow from US$1.7 trillion this year to US$5.7 trillion in 2024 (in 2008 dollars) – released in this report – as well as information on current growth trends in advertising.

Detailed descriptions and charts on seven massive trends that are changing the media landscape.

See here for the 7 driving forces shaping media framework as a stand-alone chart.

FUTURE OF THE MEDIA LIFECYCLE

A framework examining how the media lifecycle flows from the sea of content, through media engagement, to our personal clouds, and through the precipitation of participation back to the sea. It looks in detail at what will happen in the home and mobile arenas in media participation.

See here for a detailed explanation of the framework and the stand-alone diagram.

A spread looking in detail at the Flow Economy framework as a tool for developing strategy in media-related industries, as well as snapshots of the role of scenario planning and game theory in media strategy.

This will be released as a stand-alone document shortly.

The report also includes an overview of some of the work Future Exploration Network does for its clients.

We hope and expect that the report will get similar attention to the last two years’ reports (well over 100,000 downloads and an enormous amount of commentary and attention). We look forward to your thoughts!

We are entering the media economy. The traditional boundaries of the media and entertainment industry have become meaningless. Today almost every business and social activity is a form of media. An increasing proportion of our social interactions happen across media channels. Every organization is now a media entity, engaged in creating and disseminating messages among its staff, customers, and partners to achieve business objectives. As the physical economy becomes marginalized and economic value becomes centered on the virtual, media encompasses almost everything.

Each year Future Exploration Network runs the Future of Media Summit, linking Silicon Valley and Sydney with video and cross-continental discussions, and launches an accompanying report. The striking impact of the 2006 and 2007 Future of Media Reports means this year’s report has a lot to live up to. We are confident the new frameworks and ideas we are contributing will again provide substantial value.

Over the last years we have helped many media organizations develop and implement effective strategies. We thrive on helping companies to create the future of media. However it is also exciting to take these issues and conversations into a broader sphere. Welcome to the conversation.

New Framework: Seven Driving Forces Shaping Media Future of Media Summit blog: Mark Pesce on iPhone phails, Tom Abate on future...
Scroll to top
This website or its third-party tools use cookies to improve user experience and track affiliate sales. To learn more about why we need to use cookies, please refer to the Privacy Policy.