[UPDATE:] The complete Future of Media Report 2008 is now available.

This is the second framework we are releasing in the lead-up to the Future of Media Summit 2008, which will be held next week simultaneously in Silicon Valley and Sydney. This and other content will be used to provide a starting point for discussion and conversation.

The first was the Future of the Media Lifecycle, which has already attracted substantial links and commentary. In the next days another framework on strategic tools will be released, as well as the complete Future of Media Report 2008, including all three frameworks and additional content. 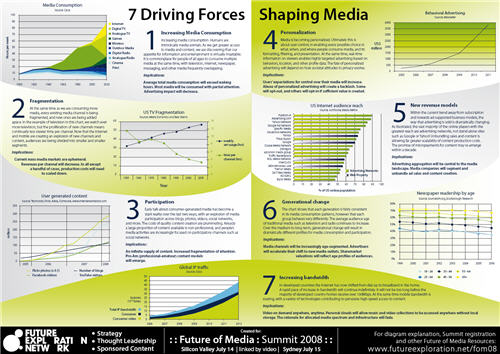 The framework contains all details on the Seven Driving Forces, including a description, implications, and a chart.

The Seven Driving Forces are:

Even more new speakers: Belinda Rowe – Zenith Optimedia, Stephen Hollings... Launch of the Future of Media Report 2008! We predict the media industry will...
Scroll to top
This website or its third-party tools use cookies to improve user experience and track affiliate sales. To learn more about why we need to use cookies, please refer to the Privacy Policy.