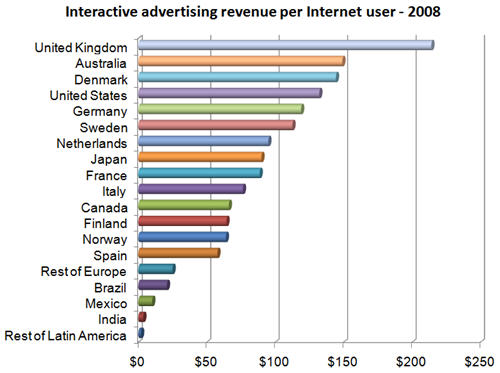 I haven’t looked at the PwC methodology, but presuming the raw data here is valid and comparable, this creates up some very interesting insights. The first question is why is the UK outspending other countries by so much, and why is Australia in second place?

I’ll think about and research this more, but some early speculation: UK’s advertising industry is probably more influential than in any other country, and has taken a strong lead in bring advertising into the online space. The BBC’s lead in digital content provision has helped not just to bring people online, but also to get them engaged in video and rich media. Australia’s online advertising space is dominated by the major media players more than almost any other developed country, and its advertising sales teams have been effective at both getting clients to advertise online, and to pay premium prices (compared to the many low cost advertising

Another interesting statistic is that Canada spends little more than half the US per capita in online advertising. Possibly US advertisers accessing the Canadian market are not accounted for in these figures. Canada was in fact the first country in the world where broadband overtook dial-up in number of users, in 2003.

Definitely interested in any insights anyone has into these statistics and the disparities between countries!