The site already includes an excellent free e-book The Micro Maven Revolution. You can download it from here or by clicking on the cover below. 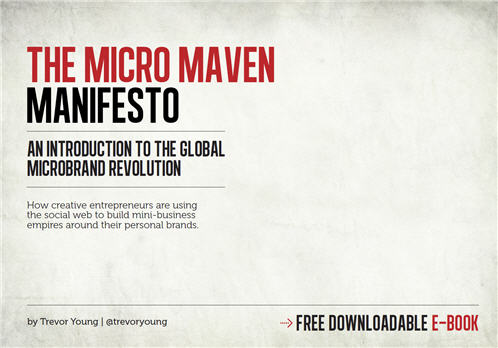 Trevor opens the book by practising what he preaches, highlighting his capabilities and brand in a low-key way in front of excellent content. He then describes the core idea:
END_OF_DOCUMENT_TOKEN_TO_BE_REPLACED

This article was originally posted in Future of Sex magazine.

Social gaming giant Zynga, purveyor of Facebook games such as CityVille and FarmVille, is making things a little racier with its latest product The Ville, launched today.

As the video shows, users can build the “home of your dreams” and invite their Facebook friends over to have fun there. The fun can start with talking, cooking, and dancing, and then go a little further.
END_OF_DOCUMENT_TOKEN_TO_BE_REPLACED

I was recently in Rome for 24 hours to run a workshop for the senior technology executives of a global Fortune 50 company. While I was in town I was keen to try to catch up with collaboration and new media expert Robin Good, who I have known online for many years but never met, so I got in touch to see if we could catch up.

Fortunately he was available, and he took the opportunity to do a video interview with me. He has excerpted part of the interview in a great post Curation – A View from The Future: Ross Dawson, which includes 4 brief videos of me sharing my thoughts on curation.

Here is the fourth video in which I talk about the 3 intents of curation.

Here are the 3 intents, presented in reverse order from the video.
END_OF_DOCUMENT_TOKEN_TO_BE_REPLACED

I will be presenting a free webinar on June 14 at 11am US EDT, organized by Ketchum’s Global Media Network. Webinar details are here or you can register directly here.

In the wake of the launch of my book Getting Results From Crowds, one of the fields I am spending the most time on is crowdsourcing for marketing. One of the first and most important corporate applications of crowdsourcing is better marketing. While there are already many great examples and case studies, we are still early in what is a fundamental shift in how marketing is done, moving to being increasingly based on crowds.
END_OF_DOCUMENT_TOKEN_TO_BE_REPLACED

END_OF_DOCUMENT_TOKEN_TO_BE_REPLACED

The US Federal Trade Commission has provided detailed endorsement guides, specifically revised to include social media, “because truth in advertising is important in all media – including blogs and social networking sites”.
END_OF_DOCUMENT_TOKEN_TO_BE_REPLACED

TheNextWeb produced a good quality video of my keynote at TheNextWeb Conference 2012, shown below.

Here is a brief overview of the structure of the presentation:
END_OF_DOCUMENT_TOKEN_TO_BE_REPLACED

That is crazy. Emailing documents back and forth is fraught with staggering problems, not least version control.
END_OF_DOCUMENT_TOKEN_TO_BE_REPLACED

Yesterday I ran Getting Results From Crowds and Crowd Business Models workshops in Sydney, the first in a global series of crowdsourcing workshops.

In opening the Crowd Business Models workshop, I ran through some of the driving forces that are shifting business models to crowds. I had quickly drawn up the list the evening before the workshop, with the first coming to mind Distributed Attention.

During the workshop we had an awesome panel of three of Sydney’s top entrepreneurs: Rebekah Campbell of Posse, Sebastien Eckersley-Maslin of BlueChilli and Phil Morle of Pollenizer.

Each one of them spoke about how much harder it is to get people’s attention than even a year or two ago. For each of them, one of the fundamental reasons that business models need to start with crowds is that individual attention is increasingly fleeting. You can’t bolt on crowds to a business model as an afterthought – it must be at the center.
END_OF_DOCUMENT_TOKEN_TO_BE_REPLACED

The day started by giving the keynote at a Consumerization of IT event run by CIO Magazine, supported by HP and Microsoft.
END_OF_DOCUMENT_TOKEN_TO_BE_REPLACED