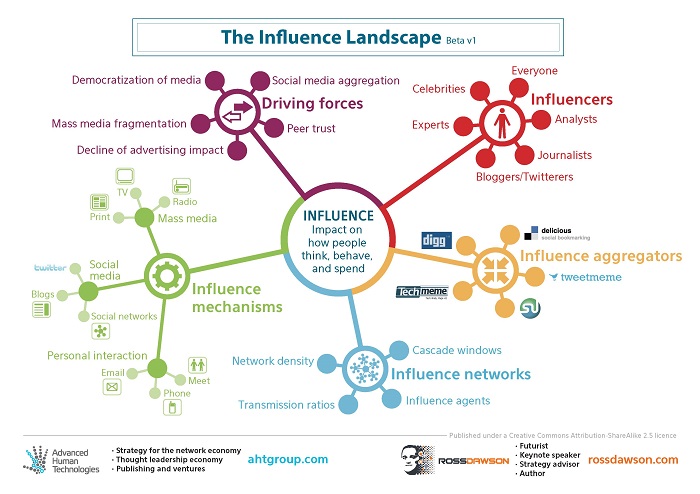 INFLUENCERS:
There are a wide variety of roles played by influencers, with different dynamics for each in how they influence and how they can be reached.
– Everyone
– Analysts
– Journalists
– Bloggers/Twitterers
– Experts
– Celebrities

INFLUENCE AGGREGATORS:
While influence flows through many channels, one of the drivers making social media more important is that influence of many is aggregated through a variety of tools.
– Digg
– delicious
– Tweetmeme
– Stumble Upon
– techmeme

INFLUENCE NETWORKS:
Influence flows through networks – it cannot be understood as a linear mechanism focused on individual influencers. There are a number of key aspects of influence networks that need to be addressed to tap the power of influence.
– Cascade windows
– Influence agents
– Transmission ratios
– Network density

DISCUSSION
* How can the framework be improved?

* What is missing from the framework

* Are the elements of the influence landscape changing?

Enterprise 2.0 Implementation Social Media Strategy Framework: Explanation and Guide
Scroll to top
This website or its third-party tools use cookies to improve user experience and track affiliate sales. To learn more about why we need to use cookies, please refer to the Privacy Policy.