However this does not mean cash will die.
END_OF_DOCUMENT_TOKEN_TO_BE_REPLACED

Future of government seems to be the topic of the moment.

After my post yesterday on Citizen sourcing and the future of cities and last week on Four fundamental principles for crowdsourcing in government, I have to report about GitHub launching government.github.com. 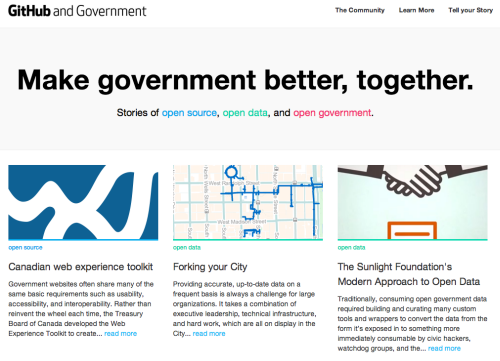 As it happens, in my recent keynote on A Future of Crowds: Implications for Government and Society, I discussed the issue of GitHub as a tool for crowdsourced government.
END_OF_DOCUMENT_TOKEN_TO_BE_REPLACED

PSFK has just launched a nice report and summary presentation on the future of cities, embedded below.

The Future Of Cities from PSFK

The third section of the report covers Citizen Sourced aspects of the future of cities, including:
END_OF_DOCUMENT_TOKEN_TO_BE_REPLACED

A few weeks ago I gave the keynote at the annual conference of the Business Improvement and Innovation in Government (BIIG) network of the Queensland Government, speaking on A Future of Crowds: Implications for Government and Society.

I have been increasingly pulled towards the government sector over the last years. I’m delighted, as changing the nature and structure of government is one of the most important aspects possible in creating a better future for ourselves.

In my keynote, after describing the underlying tenets of crowdsourcing and giving a varied set of examples of how they can be applied in government (which I’ll share in another post), in my final section on leadership I ran through the practical issues that drive success and finally offered four principles for crowdsourcing in government.

Here are the four principles in summary:
END_OF_DOCUMENT_TOKEN_TO_BE_REPLACED

There is a big hubbub today over a New York Times article N.S.A. Gathers Data on Social Connections of U.S. Citizens.

I fail to understand why this is big news, since US intelligence agencies have been using social network analysis (SNA) for domestic purposes since the 1990s, and likely even before that. The only issue here is that the NSA is tasked with non-domestic surveillance, so is not supposed to gather data on US citizens. However other US agencies that cover domestic intelligence have long been using SNA.

Certainly recent revelations suggest the NSA appears to have data surveillance capabilities that exceed those of US domestic intelligence agencies, but there is no good reason to imagine the CIA, among others, doesn’t have access to equally good data to seed its social network and other analysis.

I have been focused on networks since long before I wrote Living Networks in 2002. In the July 22, 1997 issue of The Bulletin (at the time Australia’s equivalent of Newsweek) included an article I wrote titled Beware! Netmap may be watching, which described how an Australian software package called Netmap was being used by police and intelligence around the world, taking examples of the identification of insider trading and a serial murderer. I wrote:

“For nearly 10 years, Netmap has been used primarily in high-level security and intelligence analysis. In Australia clients include the NSW Police… and the Australia Tax Office, while in the United States, several secretive government agencies use the software.”

END_OF_DOCUMENT_TOKEN_TO_BE_REPLACED

It draws on 16 excellent case studies of how to develop “metropolitan IQ” and a healthy “urban metabolism” (analogies I of course love), including both international and Australian examples. These are summarized below and described in detail in the paper:
END_OF_DOCUMENT_TOKEN_TO_BE_REPLACED

I am at the Digital Malaysia National Crowdsourcing Conference in Kuala Lumpur, where I gave the keynote this morning on the global crowdsourcing landscape and the opportunities for Malaysia.

It is fantastic to see what Malaysia is doing. Digital Malaysia is the government agency tasked with developing Malaysia as a digital nation towards 2020. One of its 8 current major initiatives is in using crowdsourcing to give work and opportunities to the least advantaged 40% of the population.
END_OF_DOCUMENT_TOKEN_TO_BE_REPLACED

TheNextWeb produced a good quality video of my keynote at TheNextWeb Conference 2012, shown below.

Here is a brief overview of the structure of the presentation:
END_OF_DOCUMENT_TOKEN_TO_BE_REPLACED

The JOBS crowdfunding Act is a great step forward, but the potential of the entire scheme is undermined by the lack of reputation measures.

This is my first opportunity to write about the historic passing on Thursday of the JOBS (Jumpstart Our Business Startups) Act that allows equity crowdfunding in the US.

I have covered the early moves towards equity crowdfunding in the US that resulted in this bill and included a chapter on the topic in Getting Results From Crowds. It is very exciting to see this come to fruition, in the end faster than almost anyone could have predicted.

I believe that this is a critical shift that is taking capitalism into a new phase. The capital markets are – finally – becoming more open, allowing capital to go where it will be best used.
END_OF_DOCUMENT_TOKEN_TO_BE_REPLACED

SOPA, The Stop Online Piracy Act, is big news in many ways, not least in marking what is likely to be a historical landmark in the battle between traditional media and a now-powerful new media, played out in political influence and the shaping of critical legislation.

One of the most important ways to beat SOPA is to provide a good alternative. The majority of politicians seem to think that online intellectual property rights need better protection, so to kill SOPA requires providing something that can supplant it.

Into this field comes Rep. Darrell Issa, whose involvement in legislation to allow equity crowdfunding I wrote about a few months ago. Issa is essentially seeking to ‘crowdsource’ a bill. Good.is reports:
END_OF_DOCUMENT_TOKEN_TO_BE_REPLACED