The first role we are very actively recruiting for is a genius projects/ marketing/ web/ publishing assistant or manager. The ad says in its capabilities section:
END_OF_DOCUMENT_TOKEN_TO_BE_REPLACED

The guidance in essence recognizes crowdfunding and clarifies the current legislation that applies to the area. It notes that if crowdfunding activities “produce financial benefits” then they are regulated under the Corporations Act and will require a disclosure document.

In the case of crowdfunding being effectively “pre-purchase arrangement of a product or a service”, then it will be regulated by the Competition and Consumer Act, that applies to all retail sales.

These points were pretty obvious, so this part of the guidance simply clarifies the relevant legislation for those involved in the space.

Where the guidance gets interesting is on what they expect from crowdfunding platforms in helping to manage risks:
END_OF_DOCUMENT_TOKEN_TO_BE_REPLACED

I’ll be in Perth, WA the evening of 13 August after a client workshop.

After a quick pow-wow on Twitter, a few fine folk have agreed to catch up for a drink and conversation about Twitter, media, the future, startups, or whatever else we feel like chatting about.

Ignacio Rodriguez and Enrique Mena, CEO and COO respectively of Chile-based Spanish-language crowdsourcing platform MeritusPro (which I am an advisor to) will be in Sydney this week, so I thought it would good to organise a crowdsourcing entrepreneurs drinks for any entrepreneurs involved directly or indirectly in the crowdsourcing space, though all are welcome.

BlueChilli has kindly offered their new city space as a venue.

Australia’s Department of Broadband Communications and Digital Economy has just provided a submission to the government’s Inquiry into IT Pricing.

I was interviewed on ABC24 about the findings, and more generally the reasons why Australians pay more for digital goods. Click on the image to view the video of the interview. 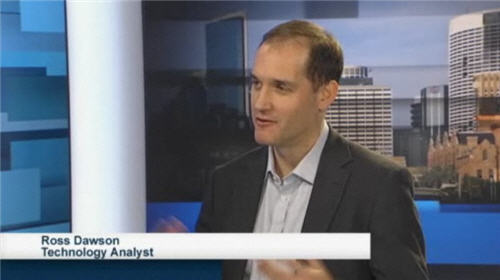 END_OF_DOCUMENT_TOKEN_TO_BE_REPLACED

Incubators and accelerators are blossoming all over the world, with in Australia the seed accelerator space represented most prominently by StartMate, PushStart, and Melbourne-based AngelCube. I wrote about the Australian accelerator scene when PushStart was launched.

Yeseterday afternoon I went to PushStart’s demo day for their first intake. I was very impressed by the calibre of the startups presenting. I took notes through the presentations of the 8 startups, as below, which hopefully offer a fair representation of the companies and what they said. I expect to see more from this impressive crop of incubators.
END_OF_DOCUMENT_TOKEN_TO_BE_REPLACED

Today’s ‘Fairfax of the Future’ announcement from Australia’s second largest newspaper publisher Fairfax is massive news in Australia, and very significant in a global media context.

It has been a busy media day for me, so far doing interviews for SBS World News and ABC24 News as well as a number of radio stations, due to my earlier predictions of the extinction of newspapers. My Newspaper Extinction Timeline was launched in October 2010, at the time getting mainstream media coverage in over 30 countries and being seen by well over 1 million readers within one week.

Recently I have been reconsidering some of the forecast extinction dates for a number of countries, notably after my recent European speaking tour. Fairfax’s announcements today significantly shift forward the likely loss of news-on-paper as a significant media format, and in fact make 2022 seem an exceedingly optimistic timespan for newspapers to survive in Australia.
END_OF_DOCUMENT_TOKEN_TO_BE_REPLACED

The US Federal Trade Commission has provided detailed endorsement guides, specifically revised to include social media, “because truth in advertising is important in all media – including blogs and social networking sites”.
END_OF_DOCUMENT_TOKEN_TO_BE_REPLACED

Below is a brief interview I did when I spoke at TheNextWeb conference in Amsterdam recently.

Some of the points I cover:
END_OF_DOCUMENT_TOKEN_TO_BE_REPLACED

Following the launch and fantastic response to Getting Results From Crowds we will be running a series of workshops around the world on creating value using crowds and crowdsourcing.

The first ones will be in Sydney on April 16, followed by a number to be announced shortly in Europe and the US (see our call for crowdsourcing workshop partners).

See the event page for full details on the workshops.
END_OF_DOCUMENT_TOKEN_TO_BE_REPLACED