We can readily stop COVID-19 from spreading and reverse its path of devastation.

It just requires health authorities and the government to track our every movement and everyone we come into contact with, with no exceptions.

This is already happening to a substantial degree in a numnber of countries, and quite possibly has been a major factor in limiting the spread of the disease in some instances.

How countries are using technology to track COVID-19 cases now

In Israel, the government recently approved measures for the mobile phones of confirmed and suspected cases of COVID-19 to be monitored by the security services and police. This enables quarantine to be enforced and to identify potential close contacts.

China of course has long tracked its citizens closely using facial recognition and other technology, to which it has added additional measures including a color-coded QR system for citizens in over 100 cities across the country. Hong Kong puts tracking wristbands on new arrivals to the city.

South Korea is one the major coronvirus “success” stories, starting from being one of the most affected countries to strong containment. A key part of the story is that has tracked residents closely using facial recognition, phone tracking, and bank card usage to identify who may have been infected in previous days by confirmed cases.

Earlier Iran‘s government launched an app for citizens that was supposed to diagnose coronavirus, but actually collected location data.

Taiwan has mandatory phone confirmation protocols for quarantine, and provides a temporary smartphone for those who don’t have one.

Singapore has extensive spot-checks for fever and their existing tracking based on mobile phone and other data is estimated to have accurately identified three times as many cases as other countries. Yesterday launched a TraceTogether app for contact tracing, though it is opt-in.

The US government has asked Google and Facebook for anonymized location data on residents and their movements, though as some have noted that anonymized data can still often be used to identify individuals.

How tracking data can be used

Quarantine or self-isolation is extremely difficult to enforce at scale, either for recent entrants from countries where coronavirus is prevalent, or those who are confirmed or suspected cases. Tracking can assist in helping enforce those quarantines, or find out where they have been if they have broken their isolation to identify possible close contacts who need to be tested.

However people are infectious before showing symptoms, let alone being tested or getting results, so only tracking people after they are suspected of having the disease is of limited value.

What would make the most difference is stopping the spread of the disease is being able to track all close contacts over the previous seven days or so after a case is confirmed or suspected. This would require everyone’s movements to be tracked, or to be made available from telcos or companies with data from mobile operating systems such as Google or Apple.

This would allow the touchpoints from every instance of the disease to be isolated and thus further contagion. 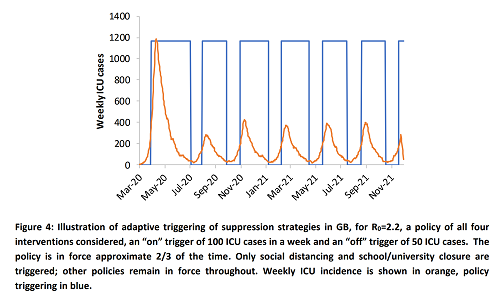 This chart from a highly-cited recent report by Imperial College of London epidemiologist Neil Ferguson, credited with changing the UK government’s COVID-19 strategy, shows the impact of successive periods of social distancing including closing schools.

This is a likely scenario, in which social distancing is eased as new cases subside, but given how infectious the disease is, outbreaks flare up again.

These outbreaks could be highly localized as travel is now minimal. The Australian government among others has already flagged that it could place specific suburbs on lockdown.

However arguably these could be more effective if limited to those who have been in close contact with people with or exposed to the disease.

In the case of China, Israel, Taiwan, South Korea and some other countries, at least some elements of the tracking are mandatory, and in many cases not visible or apparent to the public.

In other countries, such as Singapore and UK, some of their tracking is opt-in, such as downloading apps or using QR codes to specify their location.

Privacy and other legislation in the US, EU, and many other Western countries strongly limits the degree to which mandatory tracking is possible. As many have pointed out, once privacy is eroded during times of crisis, it becomes a ‘new normal’ which continues indefinitely.

As such, barring draconian emergency legislation or covert government action, this requires people to opt-in to personal tracking which can identify literally everyone they came within a few meters of over the previous week, in short to lose essentially all personal privacy.

For almost two decades privacy has eroded dramatically in the name of fighting terrorism. It is a quite different issue when privacy is placed against health, with the potential for millions of lives to be at stake.

We have the tools to dramatically curtail the spread of coronavirus. Yet there are very real concerns about not just loss of privacy, but the long-term implications of that.

Each country and society will address this is in its own way. This is a debate we need to be having, as it is central to not just this pandemic, but the likelihood that for years to come we will be focused on containing the spread of disease.

Predictable pandemics and unpredictable demographics: the impact of COVID-19...