I first wrote about Techmeme over 5 years ago. Today Techmeme remains the reference point for what’s hot in technology news. Bloggers and publishers strive to appear on its pages, not just because of the traffic it drives, but also because the people who visit Techmeme are among the most influential in the business.

Founder Gabe Rivera has just shared some insights into how particular articles are selected as the lead article on Techmeme for a particular breaking story. For the first few years Techmeme used only an algorithm, however it has had human editors to complement the algorithm for almost three years now.

It turns out that one of the reasons to have humans is to select the stories with the most informative headlines. In an aggregator site, headlines are critical, as they need to tell as much of the story as possible. The rise of the web has had a big impact on headline writing, not least for search optimization, but also increasingly for aggregation.

Here are some of Gabe’s tips on how to make your story hit the front page of Techmeme:
END_OF_DOCUMENT_TOKEN_TO_BE_REPLACED

Today influence ratings service Klout significantly changed its rankings. Last week Klout CEO Joe Fernandez announced there would be changes, saying “a majority of users will see their scores stay the same or go up but some users will see a drop”. It seems that was not correct, and rankings levels have been revised such that most people’s scores go down. The results appears to be plenty of unhappy people.

Before I offer a few thoughts on this, it’s worth addressing those who say they couldn’t care less about their Klout score. It is absolutely fine, and quite possibly the most appropriate response, not to care a jot what number a service happens to attribute to your influence.

I’ve written extensively on this blog about influence and influence networks over the last six years, and in fact our Future of Influence Summit 2009 had Klout CEO Joe Fernandez and other luminaries of the emerging influence space speak on the business models for influence and reputation panel.

The reason is that, like it or not, the measurement of influence and reputation is one of the most important changes we are seeing in society. We see the ‘reputation economy’ as one of the ExaTrends of the decade.

In a world in which influence has become completely democratized, having measures of influence and reputation will drive many facets of society. Of course, the validity of the influence measures we use is a different matter, but an increasingly important one.

Here are a few quick thoughts on the changes:
END_OF_DOCUMENT_TOKEN_TO_BE_REPLACED

Last week I attended a breakfast organized by IBM for a small group of Chief Marketing Officers (CMOs) and influencers, hosted by its Australian CMO Mark Willson.

IBM had recently launched its global CMO study, showing what CMOs are thinking about marketing today and in the future. At the breakfast it gave us a sneak preview of the results from the Australian respondents to the study.

We were shown four infographics that highlighted the results as a starting point for a robust breakfast conversation. It was a very interesting and useful conversation; I thought I’d highlight just two of the many issues we discussed. 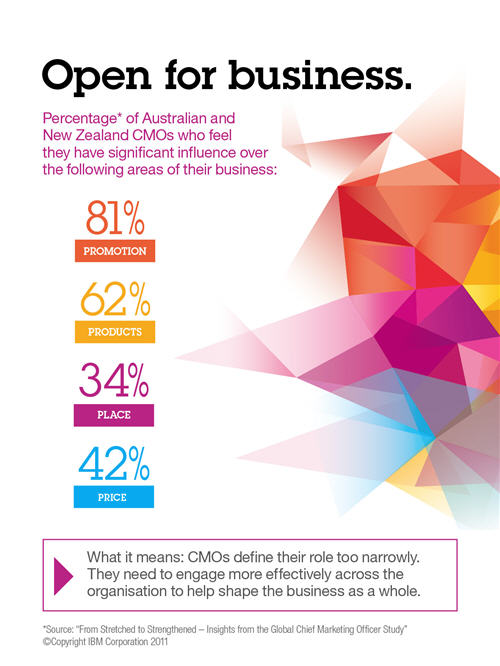 END_OF_DOCUMENT_TOKEN_TO_BE_REPLACED

Twitter has moved from asking ‘what are you doing now?’ to ‘what’s happening?’, and now describes itself as an ‘information network‘.

The Twitter News Network is a manifestation of the global brain, in which we create value for others by contributing to the visibility and availability of high-value information.

While many contribute nothing of value to Twitter, many extraordinarily talented and interesting contributors are doing what they can to add value to others. It is a choice we make, by how we engage in our social networks.

If we consider what we can best contrbute to global consciousness, it is very likely the most interesting things we come across. The most intriguing, through-provoking, stimulating ideas, whether they be in the form of an article, a video, a conversation, or anything else from the vastness of media and ideas we encounter each day.
END_OF_DOCUMENT_TOKEN_TO_BE_REPLACED

This morning I gave the opening keynote for an internal future strategy session at a large insurance company. A group of 40 executives from across the organization, as part of a six month program, are spending two days immersing themselves in thinking about how the structure of the economy could change in the years and decades ahead, and the implications for their business.

My presentation gave a very big picture view of selected elements of the economic landscape that could result in a substantially different business environment.

One of the topics I covered was alternative currencies, including virtual currencies, Bitcoin and other anonymous currencies (more on that another time), and the idea of attention, reputation, and other intangibles as currencies.

Over the last years I have certainly frequently discussed the reputation economy, influence economy, and also the economics of attention.

However the idea of intangibles such as these acting as currencies is a step further, suggesting they can replace financial transactions. Is this a valid idea?
END_OF_DOCUMENT_TOKEN_TO_BE_REPLACED

For many reasons PR (or perhaps rather what PR could be) is close to the center of my interests. As we shift to a world driven by social media and influence networks, arguably the PR industry has the best background and capabilities to help organizations deal with the new challenges and opportunities that are emerging.

Yet the PR industry has not markedly prospered relative to adjacent industries, which have muscled in on the new work generated in a rapidly changing landscape. ‘Public relationships’, if we take the term literally, dominate the agenda, yet PR is not dominating the discussion.

I recently recalled that I wrote the article Six Facets of the Future of PR well over 5 years ago now. It’s nice to see that it is still the #1 result on a Google search for ‘future of PR’.

As a good article about the future should be, it is still entirely relevant today. I thought it would be worth revisiting a few of the points I made, as they probably bear repeating.

Six Facets of the Future of PR

END_OF_DOCUMENT_TOKEN_TO_BE_REPLACED

For years I have been writing about reputation and have often said that this will be the decade of the reputation economy. Yet until recently there has been very little in the space. The social media measurement systems such as Klout and PeerIndex have limited data scope and while they talk the language of reputation actually measure influence. Honestly.com is a more pure play in the individual reputation space, but has got limited traction so far.

In recognition of the massive opportunity in the reputation space we have been building a stealth start-up Repyoot (holding page only for now), which will shortly be launched as a limited scale influence ratings engine, with the intention of morphing into a generalized reputation engine.

In developing the service and discussing it with VCs, we have always seen the most obvious latent competitors in the reputation measurement space as Google and LinkedIn. LinkedIn’s recommendation service is a long way from a true reputation service, but it provides a foundation for building one. Google’s depth of data, positioning, and mentality mean that it is well-positioned to develop an individual reputation service. While it is probably not related, I know that Google.org, Google’s philanthropic arm, has been very interested in reputation services for some years, as one of the services that would be of most value in helping developing regions.
END_OF_DOCUMENT_TOKEN_TO_BE_REPLACED

The conditions under which our Armed Forces conduct operations are rapidly changing with the spread of blogs, social networking sites, and media]sharing technology (such as YouTube), and further accelerated by the proliferation of mobile technology. Changes to the nature of conflict resulting from the use of social media are likely to be as profound as those resulting from previous communications revolutions. The effective use of social media has the potential to help the Armed Forces better understand the environment in which it operates and to allow more agile use of information in support of operations.

The general goal of the Social Media in Strategic Communication (SMISC) program is to develop a new science of social networks built on an emerging technology base. In particular, SMISC will develop automated and semi]automated operator support tools and techniques for the systematic and methodical use of social media at data scale and in a timely fashion to accomplish four specific program goals:
1. Detect, classify, measure and track the (a) formation, development and spread of ideas and concepts (memes), and (b) purposeful or deceptive messaging and misinformation.
2. Recognize persuasion campaign structures and influence operations across social media sites and communities.
3. Identify participants and intent, and measure effects of persuasion campaigns.
4. Counter messaging of detected adversary influence operations.

Tomorrow morning I am giving a keynote to the managers of a national shopping center group about the power of social media in retail, focused on fashion.

Here are the slides for my keynote. As always, the slides are not intended to stand alone, but to provide visual support for my presentation.

The Pew Research Center’s Project for Excellence in Journalism has recently released some very interesting research on Navigating News Online, digging into how people navigate to news sites and what takes them away.

Among the interesting insights was data on how news website traffic comes from Google and Facebook, shown below. 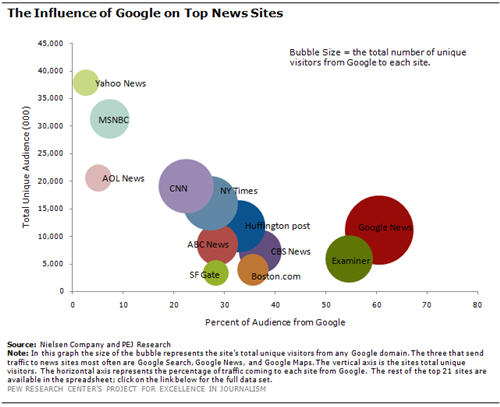