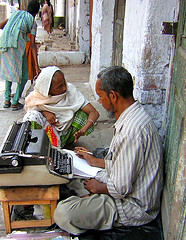 Yahoo! has just purchased Associated Content, with price variously reported at $90 million (by All Things D) and slightly over $100 million (by AdAge).

Associated Content is the second largest player in crowdsourced content after Demand Media, which is looking at an IPO which is likely to be valued over $1 billion. AOL, which was originally considering buying Associated Content when it wanted to get into the space, decided to grow its own business called Seed, which is already a strong player. Other players include Helium.

The model is primarily of advertising arbitrage – identifying where advertising returns from search visitors can exceed the cost of content. Since online advertising doesn’t pay much, content costs need to be very low. As a result the quality is not always earth-shattering.

I wrote last year about how the proliferation of crap content, and how the rise of reputation systems will make it easier for us to identify content quality and reliability. However we don’t have these yet.

While these are already thriving businesses, the very public nature of transactions such as the sale of Associated Content and the upcoming Demand Media IPO attract attention, and new entrants. As such, we can reliably predict that there will be a rapid rise in the amount of crowdsourced content. There are already an array of models, from trying to create something decent to making it barely legible (though in all cases keyword-dense).

This will make it all the harder to sort through what is worth reading and what isn’t. As importantly, it will increase demand for crowdsourced writing, hopefully keeping a floor on fees paid to writers, and giving a premium to the brand of the clients. While Demand Media is the biggest player, content creators often don’t want it to be known that they work for them, partly as it impacts their market position. Seed – while oriented to amateurs who are writing for pleasure not money – is better at promoting their writers. However there is the potential for other players to provide a premium outlet for crowdsourced content.

What we know for sure is that the amount of content being produced is accelerating at an extraordinary pace, and that’s not going to let up soon.

Launch of online community SMETechnologyForum.com – join the discussion! One more reason why Australia is a global hub for crowdsourcing: Ideas While...
Scroll to top
This website or its third-party tools use cookies to improve user experience and track affiliate sales. To learn more about why we need to use cookies, please refer to the Privacy Policy.