A few weeks ago I gave the opening keynote at the annual conference of the Regional TV Marketing association, held in Byron Bay, Australia, on the topic of Creating the Future of Media.

As I started preparing my keynote I realized that many of my usual messages about media fragmentation and re-aggregation weren’t the most relevant to this audience, and certainly not what they wanted to hear. As I spent time looking into and considering regional televsion, the more I realized that this is an extraordinarily promising media sector.

The first thing to consider is the power of big budget video production and big screens.

“Television” is close to a legacy concept, in a similar way to how “newspapers” are becoming news-on-paper and then simply news over multiple channels. However even while broadcast and cable TV erode and we shift to a world of multi-channel video, big productions and big screens will remain compelling.

This chart from Ofcom’s communication survey shows how big screens are becoming increasingly important, most of all to young people. 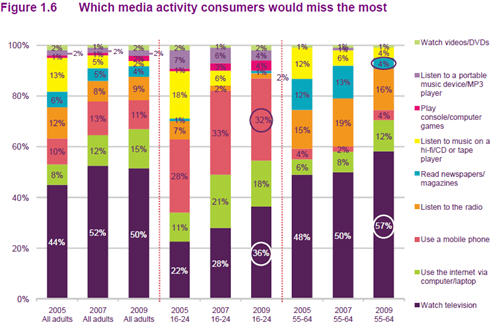 There is simply no more powerful medium than the best moving image content on large high-quality screens, particularly as 3D and other immersive technologies come into the home.

Yet video audiences are fragmenting in every dimension imaginable, creating real challenges for the TV industry. The proliferation of channels on cable is becoming exponentially greater as IPTV becomes a reality in a number of forms. A vast universe of amateur and semi-professional content is joining existing TV production. Time-shifting is a reality for in some cases the majority of programmed TV viewing.

What CAN be the savior of TV as we know it is the ability to build real-time conversations. This is driven by a number of factors.

1. Broader visibility and acceptance of Twitter is making this a possible platform to tap the participation of many. Even for those who will never join Twitter, it is starting to seem natural to engage in real-time conversations, for example on dedicated channels to accompany TV programs.

2. The emergence of the so-called “lean-back” devices such as iPads and other tablets, complementing existing smartphones, makes it natural to browse and play with other information and channels while watching TV.

3. TV programming is becoming increasingly regionalized, supported by converged newsrooms and the use of a variety of formats for integrating user generated content.

This last point is particularly important, as the potential to build community around simultaneous TV viewing is greatly enhanced by people feeling something in common, through living in the same area, and being more likely to know each other.

The most obvious point of community around TV programming is same-time chat using channels such as Twitter. The interest in this is such that tools are now available for friends to synchronize their Personal Video Recorders to watch programs together at the time of their choosing, and to share the experience through voice, video, or chat.

However there are many other ways in which social and mobile media can be overlaid over the communities that are formed by TV or other rich media channels, including forums, location-based media, and social shopping.

One of the most interesting media organizations around is Deseret News, based in Salt Lake City, Utah, which is putting these ideas into practice. Below is a video of CEO Clark Gilbert which is a must-watch for any broadcaster. A particularly powerful idea he puts forward on new business models is that all media is about aggregating audiences, after which you find mechanisms to monetize that.

Those monetization mechanisms will be different tomorrow than they were yesterday, in many cases relying on community, as powerfully illustrated by Groupon, currently attracting a $6 billion bid from Google.

However the first step is to bring together an audience and to make it a community. That is possible today as never before.

Now the truth is, despite the extraordinary potential of creating community across TV audiences, particularly in regional areas, very few TV broadcasters will do it well. I look forward to seeing the success of those that grasp this opportunity.

[UPDATE:] For a compact view also see What TV will be like in 10 years: 7 opinions from media leaders

How do you make talent shine in a world of distributed work? Australian government releases Government 2.0 Primer
Scroll to top
This website or its third-party tools use cookies to improve user experience and track affiliate sales. To learn more about why we need to use cookies, please refer to the Privacy Policy.