The Power of Influence lunch was run earlier today. This was in fact the inaugural event of The Insight Exchange. The quality of the event and the feedback augur well for The Insight Exchange future’s, and particularly for the value it will create for participants. It was a highly interactive event, with deep content and great discussion.

Below are the notes I took during the event. 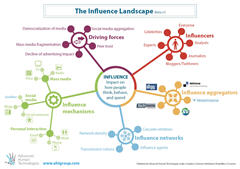 I initially presented the Influence Landscape framework we launched yesterday, after which the three panelists spoke and the event then progressed to a highly interactive discussion among all participants, from which I have taken a few notes as well.

75% of people don’t believe that companies tell the truth in advertising.

Trust in media Editorial is 56%.

* Engages others in conversations

* Inspires other to continue the conversation

* Is seen as credible

* Compels other to want to hear what they say next

* Intel Inside gIves a diverse range of prominent social media participants access to key people and resources in the organization.

Google is a key driver of how you are perceived. You need to be on top of what people see on Google.

Media fragmentation is a powerful trend (how about advertising on rooftops for Google Maps?), but mass media is still important in addition to all the new channels.

Online is now also fragmenting. Rather than going to the biggest sites, go to where the particular niches you’d like to access spend their time.

CPM rates for generic sites are plummeting, but there is still plenty of value in the right context.

WOM is genuine, honest, individual, advocacy – The most trusted medium

Use cascade interviews to map influencers, and get directed by them to who are the central hubs and biggest influencers.

You must be completely upfront about what you’re doing.

Case study: Tooheys Extra Dry (TED) – gave the brand to the consumers for them to shape.

Authenticity is the foundation.

Motivations for influencers: the three Es

Empowerment: tell them they made a difference

A lot more thoughts were generated during the event – much more content and reflections on the influence space coming over the next months!

Implementing Enterprise 2.0: Free Chapter 7 – Governance Visualization: RSS in the Enterprise
Scroll to top
This website or its third-party tools use cookies to improve user experience and track affiliate sales. To learn more about why we need to use cookies, please refer to the Privacy Policy.