The evidence is now in on what was already clear: the advertising and marketing industries are getting slammed by the coronavirus pandemic. However there are ways that the industry, particularly from an advertiser perspective, could reinvent itself. 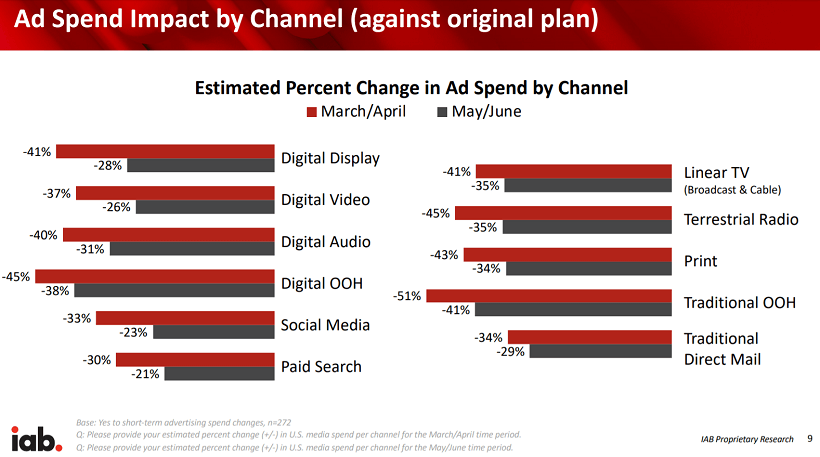 The report also notes that 74% say the impact is substantially or somewhat worse than the financial crisis, while 24% of respondents said they have paused all advertising where possible until further notice.

An article on the state of advertising industry in New York Times notes that companies including Coca-Cola and Marriott’s have stopped or limited marketing, while companies including Twitter and marketing conglomerates Interpublic Group and Publicis have suspended financial forecasts due to the degree of uncertainty.

Barrons notes that in the global financial crisis only 12% of advertising spend in the US was digital, whereas now it is 55%, meaning spend can change quickly compared to for exampel TV ad commitments, and making it hard to compare previous shocks to today.

The massive downturn is of course driven by the impact on key advertising customer segments, such as travel, retail, real estate, and for the digital platforms, small business.

I am of course known for my negative view of the fate of news-on-paper, though this was to my mind always about creating a positive future for the media industry.

Right now, every media organisation must aim to survive in order to have the opportunity to participate in the upside beyond this crisis.

As I have and will cover in this blog, we will move into a substantially different world after the pandemic that will require reinvention.

People will have changed their habits in how they spend their time, what channels and media forms they pay attention to, how they make buying decisions, and where they spend.

Advertisers and the advertising industry certainly need to hope for a revival in traditional media and marketing spending. But they also must be actively considering how the world will be different, and how they need to reinvent themselves.

Could the pandemic lead to global cohesion and a maturing of humanity?

Adaptability and entrepreneurial spirit will rebuild employment after over 100...
Scroll to top
This website or its third-party tools use cookies to improve user experience and track affiliate sales. To learn more about why we need to use cookies, please refer to the Privacy Policy.