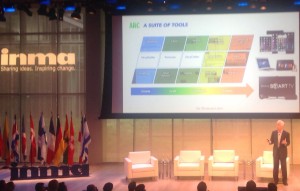 I’m at the INMA conference in New York, where I gave the opening keynote yesterday morning on Creating the Future of News.

The opening keynote on the second day was from Steve Hills, President of Washington Post, who spoke about the state of Washington Post since its acquisition in October 2013 by Amazon.com founder Jeff Bezos. He shared some fascinating insights that are highly relevant for any news publisher looking to create the future.

The big idea of what they are aiming to create is “A national edition optimized for mobile and for interestingness with a simple UX designed for stunning storytelling that is less work for the user to consume.” Bezos thinks it is critical to reduce ‘cognitive overhead’ for their readers.

Innovation is a process, starting by identifying key trends, followed by a loop of experimentation, measurement, and analysis.

In experimentation, speed is critical. To do that they embed engineers in the business and treat them as “first class citizens”. Each development group owns their innovation program end to end. There are are no central services, and chaos and duplication of resources are OK. They aim to build technology rather than buy it, and focus on open source where possible.

Paid content is the primary business model, the secondary oneadvertising. Commerce is not a priority, despite the link with Amazon.com. Hills said it is very difficult to be a walled garden, you have to give content for free as well as aim to convert readers to subscribers.

The newspaper is creating new lines of business, notably aiming to sell its ARC Digital Platform for Media as software as a service. The intent is to generate revenue from the platforms they develop to defray the costs of what they are doing.  They have designed ARC as a suite of tools, significantly using open source including WordPress, moving away from the concept of a monolithic CMS.

The Washington Post has done very well over the last year, with total digital traffic up 66% to 49.4 million unique viewers, and mobile up 93% over the same period, significantly ahead of their peers. In Q1 2015 its absolute year-on-year growth is the highest of any US publisher.

Washington Post has some great foundations to work from, including its brand, internal talent, and now backing by Bezos. However it is important to remember that it was on a rapid downward path and had to be sold, it is not all rosy. The path they are taking appears highly promising, and other news organizations should study their approach.