We continue our Influence research series, paving the way for in-depth insights and breaking new ground on the topic at Future of Influence Summit 2009 in San Francisco and Sydney.

Duncan Watts is one of a handful of scientists instrumental in developing the study of networks as a key scientific discipline. He tells his story in his book Six Degrees, which begins by recounting how he found a subject for his Ph.D in mathematics in biological phenomena, which turned out to be based on networks, and to apply to subjects as diverse as society, technology, biology, infrastructure and beyond.

Duncan co-wrote a paper in 2006 titled Influentials, Networks, and Public Opinion Formation. This used mathematical modelling to examine the dynamics of how influence could disseminate. 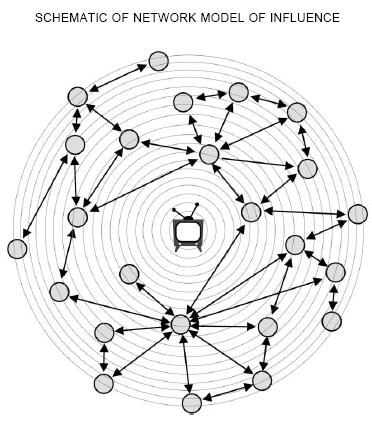 The paper’s abstract summarizes their findings:

A central idea in marketing and diffusion research is that influentials—a minority of individuals who influence an exceptional number of their peers—are important to the formation of public opinion. Here we examine this idea, which we call the “influentials hypothesis,” using a series of computer simulations of interpersonal influence processes. Under most conditions that we consider, we find that large cascades of influence are driven not by influentials but by a critical mass of easily influenced individuals. Although our results do not exclude the possibility that influentials can be important, they suggest that the influentials hypothesis requires more careful specification and testing than it has received.

These ideas received a lot of attention, not least by being seen as “debunking” the then wildly popular concepts from Malcolm Gladwell’s The Tipping Point.

A key finding of the paper is:

One way of looking at this is that what determines success in influence is primarily the audience and its network characteristics. If a social group can be influenced, it will be.

Another implication is that, irrespective of the nature of networks that you are seeking to influence, it is better to reach more people rather than fewer to launch a message. This ‘Big Seed’ approach suggests that marketers should not focus on a small number of influential people, but simply seek to reach as many people as possible to maximize chances of further propagation.

A good overview of these ideas for a non-technical audience is in Duncan’s slideshow from 2008:

However a key and often overlooked aspect of Duncan’s paper is the following quote:

As such the analyses in the paper deal only with the limited scope of small group dynamics that are not amplified by online interaction. There are some real insights here, but they do have to tempered by understanding the scope of the study, and the limitations of modelling real-world situations.

There are perhaps more questions posed than answered in Duncan Watt’s work on influence. We will dig deeper into these and where the influence landscape will go from here at Future of Influence Summit.

Twitter’s impact on the news and media cycle In the wake of the death of venture capital: Finding a balance between the incubator...
Scroll to top
This website or its third-party tools use cookies to improve user experience and track affiliate sales. To learn more about why we need to use cookies, please refer to the Privacy Policy.