MIT’s Taskforce on the Work of the Future provides some of the most well-researched insights we have on the future landscape of work.

The latter report in particular provides deep insights and updated research on key factors driving the future landscape of work, culminating in a series of policy recommendations that should be required reading for politicians and government leaders.

Below I have selected five of the most significant charts from the report. A number of these are more recently updated versions of charts I have previously shared on this blog, in many cases demonstrating that a number of long-established trends have been continued in recent years.

1. Workers are receiving a smaller portion of the value they are creating

The chart below tells several stories.

Since the 1970s there has been an increasing disconnect between worker productivity and median wages. In short, despite being more productive, median worker wages have barely increased.

However even average wages have not kept pace with productivity, providing a pertinent frame on the increasing corporate share of value creation. 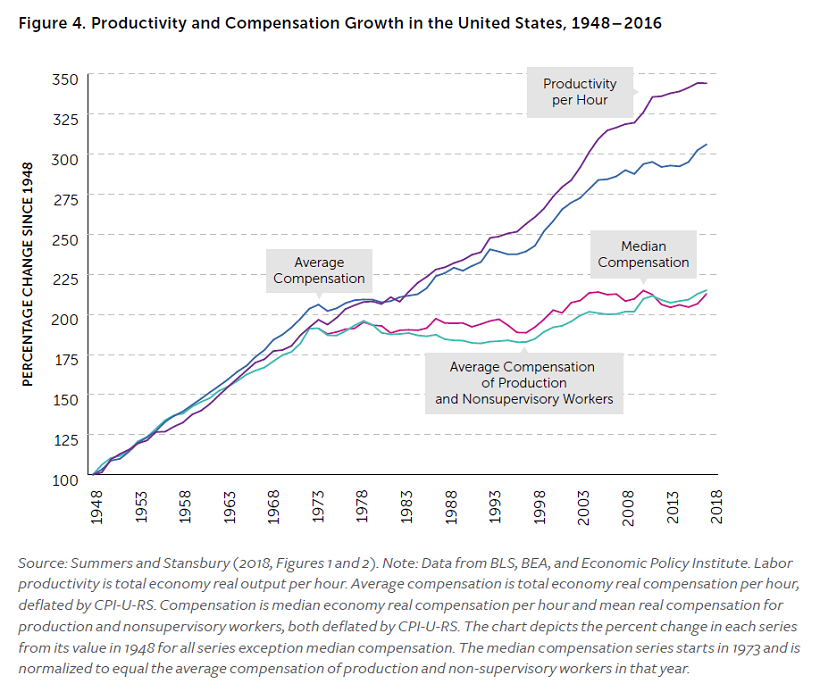 The polarization of work, in which both highly-paid and low-paid jobs increase but those in the middle erode, as illustrated below, has been long observed in the U.S. and other developed countries.

The MIT report notes that:

This polarization likely will not come to a halt any time soon. The U.S. Bureau of Labor Statistics (BLS) forecasts that the U.S. will add approximately 6 million jobs in net between 2019 and 2029.25 Of those 6 million, 4.8 million are projected to emerge in just 30 occupations (see Table 2). Two-thirds of those jobs are projected to occur in occupations that pay below the median wage. 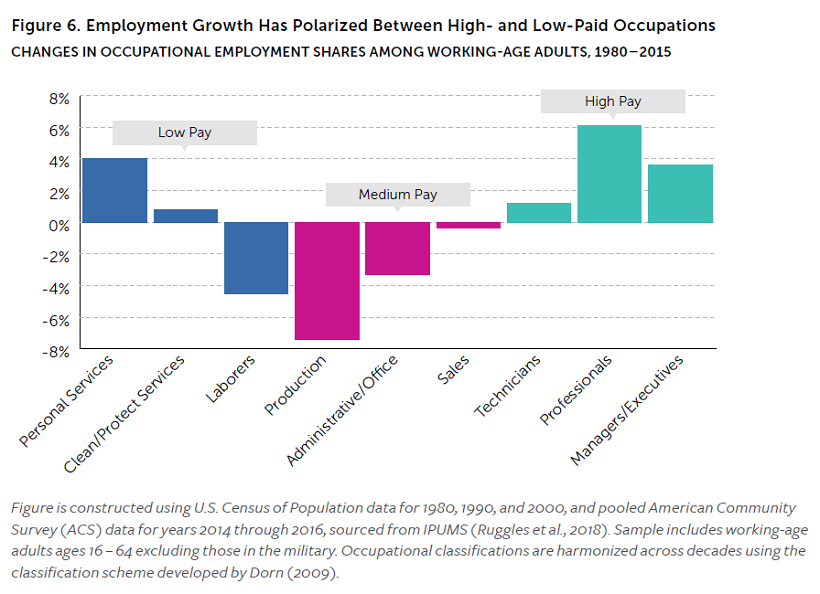 3. Social mobility varies dramatically across societies but is imperative for a prosperous future of work

In the chart below, on the bottom left countries such as the Scandinavians show relatively low inequality and high intergenerational mobility – meaning children can more easily transcend their parent’s economic status.

In the top right are the more socially static societies including some South American countries and notably China, where your birth is more likely to shape your entire life.

As the work landscape shifts more rapidly due to technological and other shifts, high work mobility and social mobility is necesssary for people to be able to shift to the emerging productive and rewarding roles that best suit them, providing the foundation for a prosperous society. 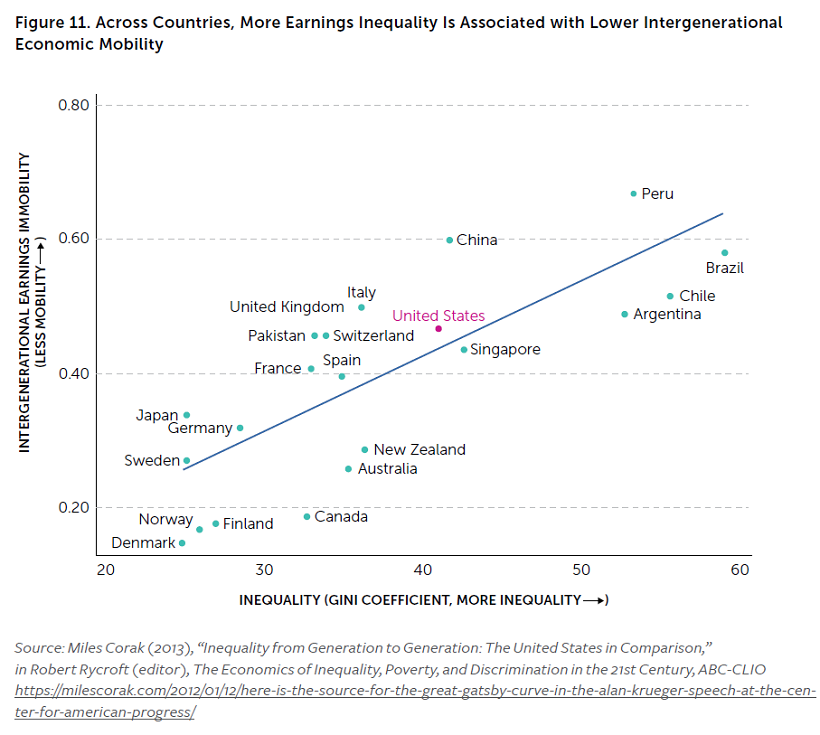 While there have been significant fluctuations over the years, the chart below shows the critical role education plays in wages.

I believe that this could disconnect to some degree in the future as learning shifts from traditional educational structures and certification, but the most recent data shows the power of formal education remains. 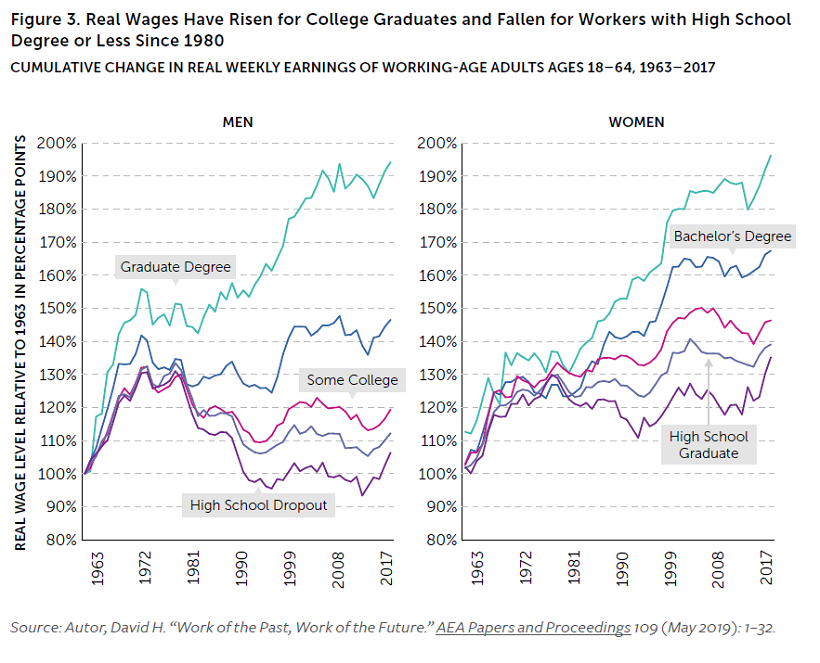 5. The impact of technology and AI will accelerate but play out differently across roles

While technology has supplanted jobs for centuries, artificial intelligence and related technologies look set to have an impact on most roles.

Looking at three distinct medical jobs, medical transcriptionists are already experiencing the impact of natural language processing, health information technicians are benefiting from the increasingly technology-intensive nature of healthcare, while nurses – whose work is most tied to fundamental human capabilities of relating and caring – have not been impacted to date.

AI will have a massive impact on most categories of work, however its impact will be not only negative, but also has the potential to expand work opportunities. 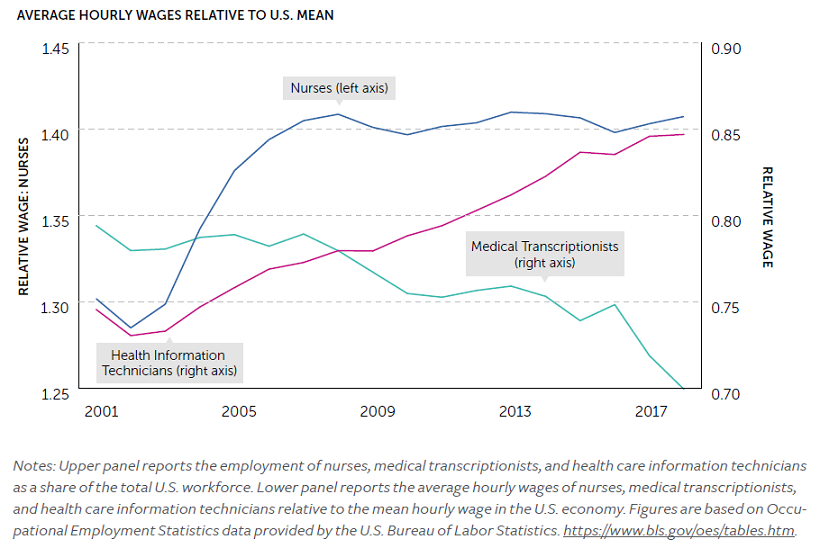 Weaving together microjourneys to create compelling customer service journe...
Scroll to top
This website or its third-party tools use cookies to improve user experience and track affiliate sales. To learn more about why we need to use cookies, please refer to the Privacy Policy.