An article just out in The Age titled The changing face of earning a living looks at the current very low growth rate in wages and the resulting social impact.

The article ends by quoting me:

Futurist Ross Dawson says the average weekly wage increased in line with labour productivity up until the early 1970s.

“Since 1973, wages and productivity have diverged,” he says. “Wages have essentially plateaued, even while the productivity of labour has risen.”

“More value has been created per unit of work, but this has not flowed through to wage increases.”

My quote referred to the US economy, where the divergence between productivity and wages has been particularly pronounced for the last decades, with just a 9% increase in real compensation over four decades while productivity rose 72%, as illustrated in the chart below. 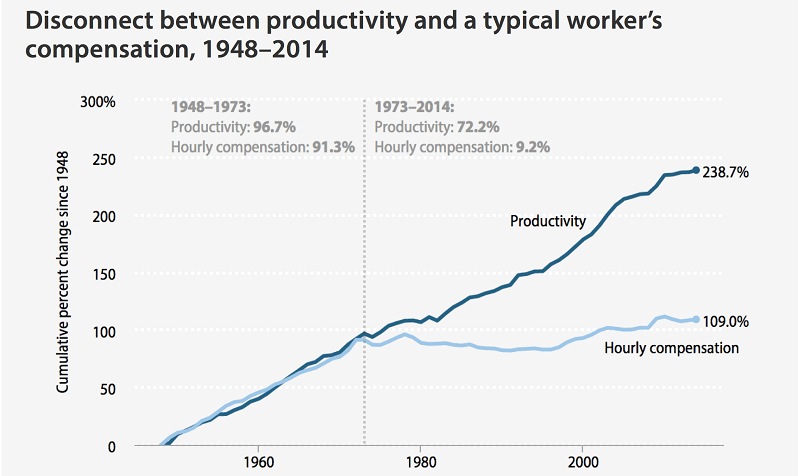 However the same trend has been long evident across most developed nations, as shown in this OECD data.

While the data shown in the data is not very recent, the same trends have continued. In a handful of developed countries such as France, Finland, and UK, productivity and wages have not significantly decoupled, pointing to a larger divergence in other countries.

Another absolutely critical aspect of this chart is that average wages are increasing considerably faster than median wages, a point I made to the journalist interviewing me, though this didn’t make it into the article.

Essentially this means that there is increasing disparity between high earners and low earners, a worrying trend that has been in place for some time.

Part of this is being driven by automation displacing jobs and the growth of low-paid service jobs, driving an increasing polarization of income.

This helps frame the concept of ‘post-capitalism‘, in seeking to create a system and society in which those creating value are adequately rewarded, rather than the increasing divergence we are currently experiencing across nations.

The divergence of labor productivity (read: value creation) and wages, overlaid with increasing polarization of income, are already leading to social fragmentation.

Especially as technological disruption impacts work and industries, organizations, governments, and all of us need to work to mitigate these trends that, if extended indefinitely, will tear society apart.

The critical role of HR in helping leaders envisage and create the future of...

5 powerful ideas that will shape the 2020s
Scroll to top
This website or its third-party tools use cookies to improve user experience and track affiliate sales. To learn more about why we need to use cookies, please refer to the Privacy Policy.