One of the most obvious ways in which crowdfunding can have a far broader impact than it does today is in playing a role alongside government, by allocating funds to benefit citizens. The “civic crowdfunding” space, focused on funding local community projects such parks, community centers, festivals, and education, has thrived, with platforms such as Spacehive and Neighborly doing well, and strong enthusiasm from cities such as Bristol. 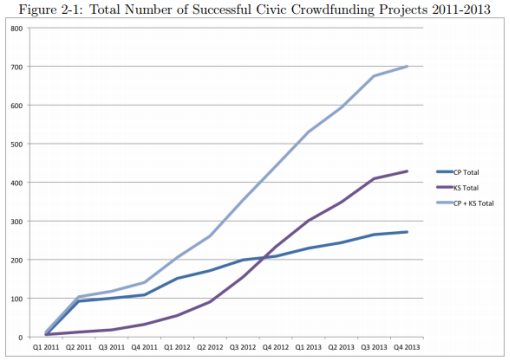 Very interestingly, the 81% success rate of civic projects on Kickstarter is higher than that of any defined category on the site, as Kickstarter does not specifically have a civic category.

Many projects are low budget and ones that local citizens see value in supporting, such as local gardens or events, however there is a very diverse range of kinds of civic projects. 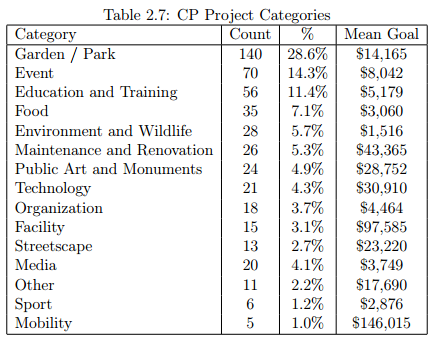 The report is rich in scope, going into some edge-case examples of civic crowdfunding, examining some theoretical frameworks for understanding the space, and looking at how government can best engage with crowdfunding.

Crowdfunding and the future of government

This goes to the broader point of the role of crowdfunding in the future of government and society. From my perspective, civic crowdfunding begins to blur the role of government and citizens. Democratic governments are effectively agents of citizens, acting on their behalf for their good. Yet now we have tools that allow citizens to take that role for themselves, choosing directly how they allocate their financial contributions to society.

There are a variety of possible responses from governments, with as noted in the report Hawaii referring to civic crowdfunding in new legislation for school maintenance, while other governments essentially ignore their citizens’ efforts.

As I noted in a recent keynote I gave on the future of crowdsourcing in government, there are clear principles that allow governments to engage successfully with their citizens’ contributions.

Could crowdfunding ultimately replace taxation? It is doubtful, but as a futurist I would like to explore how far that may be possible.

Perhaps citizens could have some element of control over aspects of budget spending or discretionary allocations. Certainly the increasing financial challenges of governments globally suggests that citizens may often need to support worthy initiatives that would otherwise go unfunded.

Civic crowdfunding is very early in its development, but will definitely play an increasingly important role in government and community.

Crowdsourcing Patent Research: How Crowdsourcing Is Influencing the Mainstr... How the next generation of display technologies will transform mobile compu...
Scroll to top
This website or its third-party tools use cookies to improve user experience and track affiliate sales. To learn more about why we need to use cookies, please refer to the Privacy Policy.