We have just posted an ad on Elance, looking for editors/ writers/ project managers for some of our existing and forthcoming online publications.

Please apply on Elance if this seems like a match, or pass it on to others if you think it might be of interest. If you have questions before applying you can use our contact form. We hope to find some awesome people!

We run a series of content websites on topics related to technology, media, and the future, among many other activities.

We are looking for highly talented editors/ project managers who can drive quality content and traffic on these sites.
END_OF_DOCUMENT_TOKEN_TO_BE_REPLACED

Crowdsourcing is rapidly gaining visibility as a mainstream business topic. The current issue of Outsource magazine has a good article titled The Road of the Crowd. It was written by Steve Bynghall, who produced the recent IBF24 event run by Intranet Benchmarking Forum, and who is collaborating with me on some projects.

It’s a good article providing a nice overview of the field, and well worth reading in full. Here are some of my quotes used in the piece.
END_OF_DOCUMENT_TOKEN_TO_BE_REPLACED

This morning I gave the keynote at the MyBiz Expo 2011, on Business Opportunities of the Future.

I had been interviewed for the cover story of February edition of MyBusiness magazine on which industries will prosper and shrink in the decade ahead. I shared some thoughts on the blurring boundaries of industries, and some specific ideas on what sectors to delve into and avoid (on which I’ll share more in a future post).

Below are the slides from my presentation, which include discussion of emerging business opportunities as well as a detailed view of my Success in a Connected World framework. As usual, be warned that the slides are not intended to stand alone but to provide visual support to my presentation.

When I posted a little while back about using an external keyboard with the iPad, I promised to share how I use the iPad for work.

When I bought the iPad I found it quite frustrating for a while in trying to use the iPad as I wanted, but I managed to work it out, and some of the elements that were missing at launch have been put in place. Here is what I have learned and how I use the iPad for work. I’m keen to hear what others have learned, as I’m sure there are plenty of other great tips.

1. External keyboard.
To my mind an iPad is of very limited use, almost a toy, without an external keyboard. I am sitting in an economy seat on an airplane right now, able to pull out my iPad and immediately write a blog post, respond to email, make notes in my to do list, or work on a client report. It is a fully functional work device. For more on this see my post The REAL transformative package: iPad plus wireless keyboard.
END_OF_DOCUMENT_TOKEN_TO_BE_REPLACED

Tomorrow morning I give the breakfast keynote at Think Business 2011, making it my third keynote this week.

For those attending the breakfast, here are my slides, which go through and flesh out our recent Success in a Connected World framework and also touch on related issues such as personal branding. The usual disclaimers apply: these slides are designed to accompany my presentation and not to stand alone. However you may still find them useful!

Here is our Crowdsourcing Landscape, now officially launched after sneak previews to the audiences of the Getting Results from Crowdsourcing event on Monday and Cisco Insight 2010 on Tuesday.

Click on the image to see a high-resolution version

The landscape provides a kick-off and focus to our new community, Getting Results from Crowdsourcing (www.crowdsourcingresults.com). Go and check it out!

The site is fairly basic so far (forgive anything not finished yet). However we’ll soon set up a wiki of crowdsourcing platforms, introduce discussions on many specific topics in the crowdsourcing space, and try to really bring this to life. We’re also looking for contributions, so go to the Contribute page and put your hand up if you’re interested.

For now we’re keen to get the site going, so please add a comment or participate in the discussions!

Last night was the Getting Results from Crowdsourcing event run by The Insight Exchange, the first in its SME Technology Forum Series. It was a fabulous night. 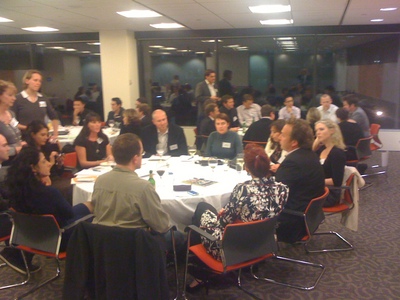 I’ll reflect more on the event and ideas raised later, but I thought I’d capture some of the blog and Twitter reflections on the event .

I believe this is a topic for our times. The future is crowdsourcing. It is the manifestation of the old idea of collective intelligence. The global brain has arrived.

We captured some videos of the keynote panel presentations and discussion – we’ll try to get them up before long. It was an awesome discussion – many really interesting points were raised. Back later on those stories.

First, just some of the response from attendees.

Lesley Barry (at least I presume that’s who @LifeStuffiKnow is) wrote a great review of the event starting with:

END_OF_DOCUMENT_TOKEN_TO_BE_REPLACED 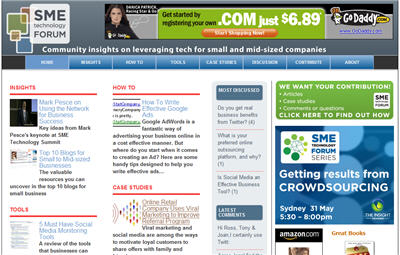 We have been busy working on a number of major initiatives this year. One of the most important directions for Advanced Human Technologies is creating communities in which we provide useful content and a place for sharing and discussion.

Our first community is SME Technology Forum, which brings together community insights on leveraging tech for small and mid-sized companies. Check it out. And when you’re there please participate if you have anything to add to the discussions or comments.

We’re keen to get your contribution to the community. We’d love to post any useful articles you have. Also do let us know if you or anyone you know has learned valuable lessons on applying technology to business – we’d be happy to do an interview to write a case study. Full details on how to contribute to SME Technology Forum here.

We will be launching more communities soon, both ones dear to our hearts, as well as custom communities for companies that want to build a rich B2B community for their customers and prospects. Keep posted for more new communities – they’re intended to be valuable for you!

After the success of its SME Technology Summit last December, The Insight Exchange is launching an ongoing series of events in the space, the SME Technology Forum Series.

The series kicks off with a very exciting evening event in Sydney on 31 May on Getting Results from Crowdsourcing. Full details are on the event page.

The keynote panel discussion features the CEOs of some of the great companies that are making Australia a global hub for crowdsourcing:

– Yvonne Adele of Ideas While You Sleep

as well as long-time lead user of crowdsourcing tools