In my keynotes and executive sessions I often use the analogy of ant colonies, in which the collective intelligence of the colony is far greater than that of its individuals.

In my book Living Networks I included a small section on Creating adaptive systems in Chapter 6 on Network Presence. The company I mention, CompanyWay, was subsequently acquired by AskMe and in turn by HiveMine, by name at least keeping to the spirit of the initial concept.

The underlying concepts described in the passage below are now being implemented into some of the most interesting crowdsourcing platforms of today, building the mechanisms whereby we can create value – and hopefully intelligence – from many.
END_OF_DOCUMENT_TOKEN_TO_BE_REPLACED

Below is an excerpt from my book Living Networks that describes how to develop effective strategies in what I call the “flow economy” of information of ideas, where today almost all value resides. You can also download the complete Chapter 7 on The Flow Economy from the book website.

While the examples I used in the book are now a little dated, the strategic concepts are still absolutely relevant. I find that senior executives and strategists at my corporate clients continue to find the strategic planning process outlined here extremely useful. While the flow economy framework is most obviously relevant in technology, media, telecommunications, and services, it can be usefully applied in almost any industry.

Strategic positioning in the flow economy 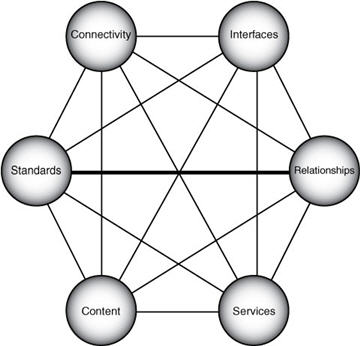 The six elements of the flow economy
END_OF_DOCUMENT_TOKEN_TO_BE_REPLACED

Here is an excerpt from my book Living Networks, giving an introduction and context to my coverage of the fundamental shifts in the intellectual property landscape today:

In 1421 the government of Florence awarded the world’s first patent to Filippo Brunelleschi for a means of bringing goods up the usually unnavigable river Arno to the city. He demanded and was duly awarded legal protection for his invention, being given the right for three years to burn any competitor’s ship that incorporated his design.

Fast forward almost six centuries, and the global economy is dominated by intellectual property, and the flow of information and ideas. This “property” exists in the space of our minds rather than under our feet, yet it is by far the most valuable economic resource that exists today.
END_OF_DOCUMENT_TOKEN_TO_BE_REPLACED

I saw Connected: The Film by Tiffany Shlain last night at its Australian premiere, organized by Annalie Killian.

The first thing I have to say is that the film is absolutely fantastic. It nails how we as humans live an intensely interdependent world, and how our recognition of and response to that will determine our future. I think the more people that see it the better, so I dearly hope it will get a healthy – or even massive – audience.

I have to say I am not an independent reviewer, and that in itself is a highly relevant story.
END_OF_DOCUMENT_TOKEN_TO_BE_REPLACED

Trust is a business perennial—from the days when chickens were traded for cowrie shells until we start trading with extraterrestrial races, trust has been and always will be the central factor in business relationships. However in the networked world there are three vital shifts in the nature and role of trust.
END_OF_DOCUMENT_TOKEN_TO_BE_REPLACED

Chapter 5 from Living Networks, on Distributed Innovation – Intellectual Property in a Collaborative World, is still immensely relevant today. We are still relatively early on in working out the implications for innovation of distributed value creation.

Here is a section towards the end of the chapter which provides 5 recommendations on managing innovation in a networked world. While some of the tools have changed since this was written, the principles haven’t.

At a scientific convention in Hawaii in 1972, Stanley Cohen from Stanford University and Herbert Boyer of the University of California met for the first time in what proved to be the beginning of a long friendship and collaborative partnership. Their joint work on a process for cloning genes in microorganisms resulted in three patents that formed the foundation of the nascent biotechnology industry. Stanford University ended up as the sole owner of the patents, reaping over $150 million in royalties as a result.
END_OF_DOCUMENT_TOKEN_TO_BE_REPLACED

END_OF_DOCUMENT_TOKEN_TO_BE_REPLACED

Here’s a brief excerpt from Chapter 1 of Living Networks on the sexual life of ideas – I’ve always had a good response to this and it remains a relevant metaphor :-)

Ideas don’t like being alone. In fact they like copulating promiscuously with any other idea in sight. There is no such thing as a virgin birth in the world of ideas. Ideas are always born from other ideas: interacting, mating, and procreating. This often orgiastic coupling takes place in the fertile substrate which is the human mind. Our minds are hotbeds of unspeakable activities—ideas have a life of their own, but they need somewhere to carry on their flirtations and breeding.

In her book The Meme Machine, Susan Blackmore suggested that humans are purely and simply carriers for memes, which means ideas or behaviors that can be passed on to others. Our species has evolved to become a more refined vehicle for propagating ideas. One result is the desire to produce and consume mass media that seems so intrinsic to our race. Another is our drive to implement communication technologies, to engage more richly with others, and to publish on the Internet.

END_OF_DOCUMENT_TOKEN_TO_BE_REPLACED

A just got an email from Tiffany Schlain, who had just seen my post on how hyper-connectivity is literally bringing the networks to life. I know of Tiffany as the Founder of the very influential Webby Awards. What I didn’t know is that she is also a filmmaker. Tiffany pointed me to the film she’s currently working on: Connected: A Declaration of Interdependence. The awesome trailer is below – well worth watching. It simply poses the question we are all facing.

END_OF_DOCUMENT_TOKEN_TO_BE_REPLACED

When I started writing my book Living Networks in early 2002 I thought that it was important to demonstrate that the concept of ‘living networks’ was not just a metaphor, but a reality: we, together with the networks that connect us, are literally a new life form.

To show this I drew on the literature on autopoiesis, which was proposed as a new way of understanding the nature of life, and wrote a lengthy introduction to the book. My editor, very rightly, thought it was the wrong way to begin the book, and the introduction never saw the light of day.

This morning when someone mentioned living networks to me I remembered that this was a literal phrase that I had never explained, so here is the introduction, seen for the first time. We are indeed part of an emerging higher-order life form, and that is a wonderful thing…

Introduction: How Connectivity is Bringing Our World to Life:

We who are privileged to be alive today are participating in the birth of a new lifeform: the global networks. All the talk of the “new economy” in the late 1990s reflected many of the changes at play in our world. In truth they may well have underestimated the importance of the juncture we are at, which represents a complete change in the nature of society and business. Since the dawn of humanity people have been the dominant force on our planet, for better and—sometimes—for worse. Now people as individuals are being transcended by a higher-order lifeform, which is connecting and merging most of the people and all the digital devices on the planet into a single entity.