Earlier this month Air New Zealand ran its second Social Media Breakfast in Auckland, with close to 1,000 people coming to see Teddy Goff, the Digital Director of Obama’s campaign, and myself speak. The number of attendees had increased since Randy Zuckerberg spoke at the first Social Media Breakfast last July, and now Air New Zealand intends to run the event regularly through this year.

Below is a brief but nice highlights video of the event, including highlighted excerpts from my and Teddy’s keynotes.

END_OF_DOCUMENT_TOKEN_TO_BE_REPLACED

I will try to write more later about what I covered in my presentation. For now here are some excerpts from ANZ’s press release on some of the very interesting statistics from a survey performed by ANZ for the launch, together with some of my comments.
END_OF_DOCUMENT_TOKEN_TO_BE_REPLACED

Power Retail magazine has just published a very nice piece on 3D Printing: The Next Retail Revolution, drawn primarily from an interview with me.

It is worth reading the entire article, but I have below excerpted some of the quotes from me with some additional commentary. The piece begins by discussing the news that a company is developing technology for the 3D printing of meat. It goes on:

“One of the major constraints currently and in the future will be the materials used in these devices,” says Dawson. “There are currently a few particular plastics that can be used and we’re beginning to see some metals and metal-plating appearing – but we still don’t have a full spectrum of materials.”

END_OF_DOCUMENT_TOKEN_TO_BE_REPLACED

Yesterday morning I appeared on the Sunrise national breakfast program together with science broadcaster Dr Karl Kruszelnicki, being interviewed about the big ideas and new technologies that will change our lives. The video clip is below.

The four ideas that I pointed to were:
END_OF_DOCUMENT_TOKEN_TO_BE_REPLACED

The cross-over between physical and online retail is not just for innovators and techies. It is the way people shop. In a 30 day period spanning Christmas, 52% of Americans who have mobile phones (and who cares about the rest? :-) ) used mobile phones to help them make buying decisions, according to research from Pew Internet. 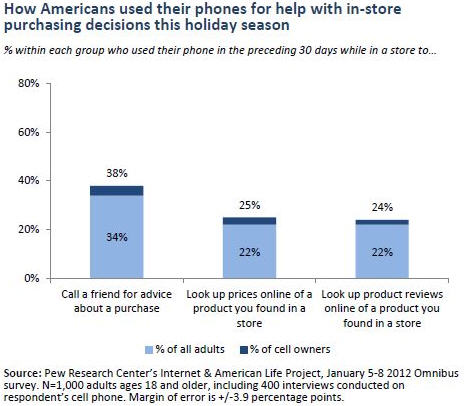