I often say that a trend-watcher and a futurist are very different things.

Trend-watchers see what has happened and implicitly assume that it will continue into the future.

Futurists uncover trends and consider the impacts of and responses to those trends, that could sustain, accelerarate, slow, or potentially reverse them.

In fact one of the most pertinent questions when observing a powerful trend is what could stop or reverse it.

The MegaTrend of Urbanization

The shift to cities has been one of the most enduring, consistent, and important trends shaping humanity over the last century. with 75 million people joining urban populations each year for many decades. 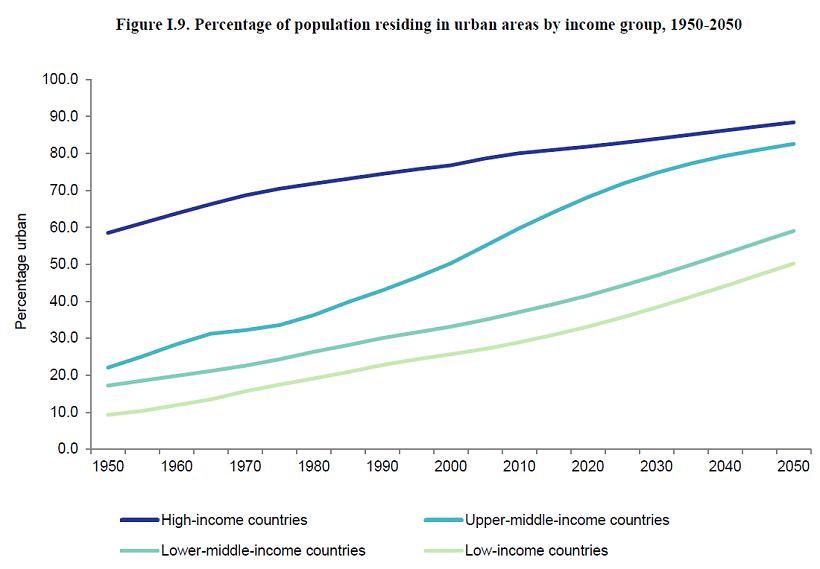 This has been driven by an array of factors including agricultural efficiency, industrialization requiring large workforces, globalization and economic competition, economies of scale, work specialization, and desire for cultural experiences.

What could reverse the trend to urbanization?

As a futurist I have long considered what could reverse the trend to urbanization.

Digital connectivity and the ability to work remotely has been rising since the last century, but at no point has it seemed likely to derail the trend to urban clusters.

As work becomes more specialized it requires working with others, both for peer learning and collaboration.

As importantly, many people value promiximity to culture and stimulating people.

As sustainability continues to grow in importance, many have focused on the negative impact of cities, however if agglomerations are well managed and designed, an urbanized population is substantially more sustainable than a more distributed and rural population.

The potential for coronavirus to erode or reverse urbabization

The potential scope of impact of the pandemic is massive, but still not clear.

A New York Times article posits that “pandemics are anti-urban,” which on the face of it is obvious given the greater scope for disease transmission among concentrated populations.

The Dean of Wharton School Business Geoffrey Garrett writes that the pandemic will reverse the trends of globalization and urbanization to increase the distance between people and nations.

Many organizations are shifting to remote work for extended periods or even forever.

Over 100 million people have lost their jobs, with many of the city-dwellers among them simply not able to afford urban rents.

Leading observer of urbanization Richard Florida says that no pandemic in human history has dented the trajectory of urbanization, though he acknowledges that many, including families and elderly people retreat from the inner city.

MIT professor Richard Sennett notes that given the relative energy efficiency of denser living, “there is going to be a conflict between the competing demands of public health and the climate”.

Where we’ll end up

A pandemic of the scale of COVID-19 will definitely slow the broader trend to urbanization, especially for cities in regions such as Europe or Australia where much of the growth has come from immigration, which has in some cases effectively stopped.

In other developed countries some city dwellers will choose to move away or bring forward existing plans to shift closer to nature.

While the existing shift to remote work has been vastly accelerated, talent will always cluster as exceptional people seek like minds to interact with and learn from.

The long-standing powerful trend to urbanization has been slowed by the pandemic. But at this point not to the extent to reverse that trend. Let’s keep watching closely as this plays out.

Conversation with Mark Pesce on the future of virtual events, organizations,...