One of the most exciting topics of Future of Influence Summit next week is exploring the business models for influence and reputation.

This is an issue which is better addressed in San Francisco/ Silicon Valley than anywhere else, and we have an extraordinary panel lined up to address the topic of Business Models for Influence and Reputation at 2:20 – 3:10pm Pacific Time.

Some of the questions I see include:

* Will there be new mechanisms for individuals to monetize their influence?

* What products or services will advertisers and marketers spend money on in seeking to tap influence?

* Will advertising spending be driven primarily by influence?

* What are models for monetizing the measurement of influence and reputation?

* Who will take the bulk of the value? Will it be the influencers themselves, or intermediaries in the emerging ecosystem?

Let’s take a very quick glance at the people speaking on the panel and what they’re doing – absolutely a star-laden cast.

Scott Rafer will chair the panel. After selling MyBlogLog to Yahoo! in 2007, Scott has founded a number of very interesting companies – notably highly successful API service company Mashery, while he has been on an extraordinary ride generating many lessons with audience-targetting company Lookery.

Joe Fernandez is CEO of Klout, which “tracks influence across the social web”, currently focusing on Twitter. Below is an image from their analysis of my profile. One of the very important features of Klout is that it not only identifies who a person influences and who influences them, but also whether that influence is increasing or decreasing – the flow of influence in networks is a key piece here. 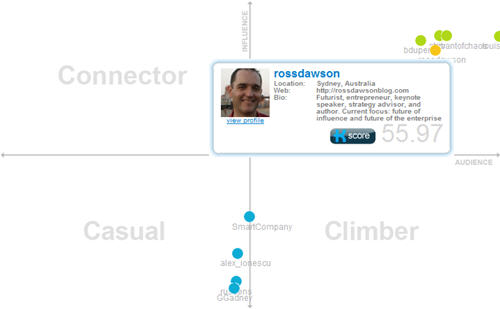 Louis Gray has experienced for himself becoming a major influencer from almost complete obscurity in just a few years, by dint of deeply insightful blogging and social media participation. Louis blogs extensively about influence and reputation, and the many platforms that give insights into these.

Auren Hoffman is the esteemed CEO of Rapleaf, which has been in the reputation space since its launch in 2006. It has been described as a meta-reputation system, though it has morphed a number of times since it was founded, and now describes itself as “the leader in automated search for people information on the social web”. Some of Rapleaf’s work for corporates is described in the recent BusinessWeek article Learning and Profiting from Online Friendships.

Todd Parsons is co-founder of Buzzlogic, one of the very first and most prominent social media monitoring companies, which provided deep analysis of blog and social media conversations. In a fascinating move announced on its blog earlier this month, Buzzlogic will no longer offer its social media monitoring service as a stand-alone product, but will provide tools to help manage the intersection between “paid media” (advertising) and “earned media”. I wrote about this in a post titled The rapid rise of the sweet, sweet spot where influence meets advertising

See our full speaker list for detailed bios of these and other speakers at Future of Influence Summit.

I’m convinced that influence and reputation are going to be central to the entire economy, and thus to most company’s business models. This panel will explore where this space is today and might go to from here.

Brian Solis at Future of Influence Summit: Putting the Public Back in Public... Five key trends in how influence is transforming society
Scroll to top
This website or its third-party tools use cookies to improve user experience and track affiliate sales. To learn more about why we need to use cookies, please refer to the Privacy Policy.