The Top 100 Australian Web 2.0 Applications will be launched tomorrow morning. I’ve seen the BRW issue, and the 8 page feature titled The New Web Revolution looks great, including a couple of articles by technology editor Foad Fadaghi, and a few breakouts on the value of Web 2.0, challenges for Web 2.0 in Australia, and the venture capital perspective, as well as the list.

The list will also be released on this blog and the Future Exploration Network site first thing tomorrow Australia time.

Do NOT be put off by the cover of the BRW magazine – we were earlier told that the cover would be on the Web 2.0 feature, but a late editorial decision changed this to a headline on agribusiness :-(. 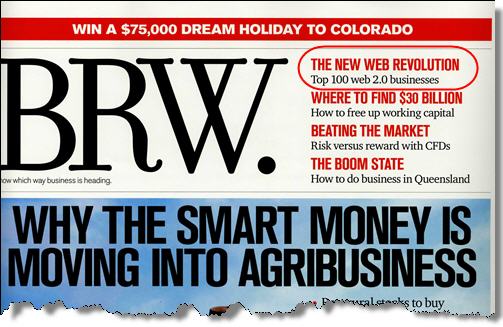 Ad networks for the long tail: Technorati enters the fray Official launch of the Top 100 Australian Web 2.0 Applications list
Scroll to top
This website or its third-party tools use cookies to improve user experience and track affiliate sales. To learn more about why we need to use cookies, please refer to the Privacy Policy.