This morning I was interviewed on both of Australia’s national breakfast TV programs, Today and Sunrise, to greet 2015. Many of the media outlets interviewing me at this turn-of-the-year have wanted to know how well the film Back to the Future II, which in 1989 depicted the world in 2015, anticipated today’s world.

Click on the image below to watch the interview on the Today show. 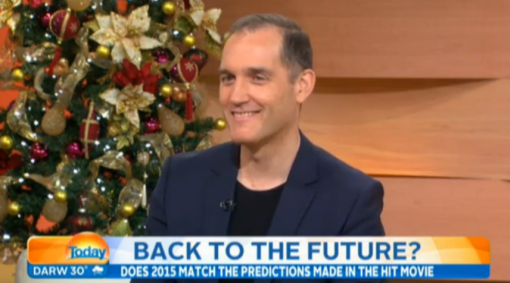 Some of the ideas we covered in the segment:

Fiction about the future whets our appetite for new technologies. It is how we discover what it is we truly want, driving new developments.

Hoverboard
People have dreamed of having a real hoverboard since they saw it in the movie. It seemed far-fetched, but the concept is now a reality and will be available for purchase in 2015.

Flying cars
We do have flying cars, including the recently launched AeroMobil below, which could be very useful for rural travel where short runways are available. However we don’t have the highly manoeuvrable cars as in the film, and are unlikely to see anything like this used for urban transport for the foreseeable future.

Dehydrated pizza
The idea of us reconstituting food in machines seemed plausible decades ago. But this is an example of possible future technologies that we see and have no desire to bring to reality. We in fact prefer fresh food.

While some of the ‘predictions’ in the film have turned out to be fairly right and others completely wrong, 2015 as viewed through the lens of 1989 is I believe as extraordinary as what is depicted in the movie.

It is important that we don’t take for granted all the amazing technologies we have today, many that were not even dreamed of a couple of decades ago, when we are indeed living deep into the future we dreamed of when we were younger.

7 defining themes for 2015 (with videos) Can Facebook-informed algorithms know you better than your mother?
Scroll to top
This website or its third-party tools use cookies to improve user experience and track affiliate sales. To learn more about why we need to use cookies, please refer to the Privacy Policy.