SmartCompany recently featured an excellent article on The next 10 social media trends, which received considerable attention and was syndicated through a number of other outlets.

I was quoted in the article talking about social shopping and mini-blogging.

Here are a few further thoughts on mini-blogs. I have written another post on the rise of social shopping, including 7 examples.

Here is an excerpt from the article on mini-blogging:

The popularity of Twitter in part reflects a desire for immediate gratification in posting and consumption of information. With so many blogs today simply reposting interesting information with added commentary, it’s not surprising that someone has found a mid-point between the two ideas, leading to services such as Tumblr (www.tumblr.com) and Posterous (www.posterous.com).

“The updates on Facebook have shifted from being very personal things to being a lot more about sharing articles and content,” Dawson says. “The mini blogs are almost purely sharing tools, designed to pull in a YouTube video or a link, but you can actually see the content as well, which brings it a lot more to life.”

Mini-blogs (also called “light blogs” or “light weight blogs” – I prefer “mini-blogs” as they sit between traditional blogs and micro-blogs such as Twitter) are basically about sharing content – links, videos, photos, text etc. – as easily as possible.

As a blogger since 2002 and with Twitter a central part of my life, there is also a role in my life in between these for a mini-blog, for things I want to share that don’t quite fit into either. Setting up a mini-blog has remained on my to-do list for too long – I’ll try to get to it before Christmas!

I recently suggested to my wife Victoria Buckley that Tumblr would be a great platform for her new photo blog. Her site Seeing Sydney, run on the Tumblr platform, is a great example of a mini-blog, featuring her beautiful photos in a lightweight and easy-to-run format.

The two dominant mini-blogging platforms are Tumblr and Posterous, though as the traffic stats indicate, Tumblr is the clear leader, attracting well over 1% of people on the internet each day. 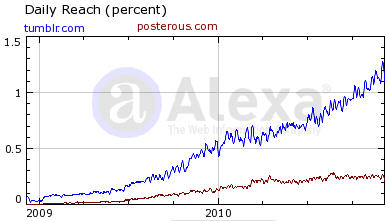 While Tumblr’s recent downtime problems have attracted substantial attention, they don’t seem likely to affect it significantly over the long-term, as long as it these problems don’t continue. Tumblr raised close to $30 million two weeks ago, meaning that it has the resources to build a more solid infrastructure as required.

These services and possibly other new ones like them will flourish in the coming year and beyond. Our human appetite for sharing is far from being sated. Traditional blogs are too much work for most people, and Twitter is certainly not for everyone.

One of the most powerful things about a mini-blog is that it is visual and engaging, very different from a Twitter stream. It can readily be made personal and shaped to express who you are.

This is related to one of the most powerful uses of a mini-blog: building a personal brand and generating online visibility. For those who have not yet engaged online in any form, aside from perhaps a protected Facebook page, a mini-blog provides an easy way to become visible. You can make the profile you have created come up in search results when people look for your name, and simply by sharing the interesting things you find, you can create value and build an online presence.

In a world in which everything is shifting online, the return on the effort required is outstanding for those who don’t yet have an online presence.

And as an added benefit, the more that people share, the better social news and information curation becomes, helping us all.

The rise of social shopping in 2011: 7 examples of where it is going ABC News: Interview on Wikileaks and the future
Scroll to top
This website or its third-party tools use cookies to improve user experience and track affiliate sales. To learn more about why we need to use cookies, please refer to the Privacy Policy.