The distribution of music taste and consumption has shifted dramatically over the decade years, and will continue to evolve significantly in coming years. 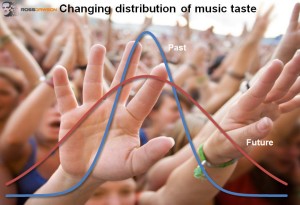 Back before a dozen years ago, radio and MTV exposed people to a limited range of music from label playlists, and the cost of records and CDs made it hard to experiment with new music.

The first big change from that landscape was the widespread availability of online music downloads, which suddenly massively broadened the music libraries of the minority of people who were active downloaders, though didn’t give people an easy way of discovering music they liked that they hadn’t heard before.

The rise of customized online radio, first Last.FM, then Pandora and a host of others, then more recently the rise of Spotify, has exposed people to a wide range of new music that they like. Only recently has there been decent social media-based music sharing, notably Turntable.fm and a number of services’ integration with Facebook, helping share music tastes more broadly.

Alongside these shifts, over the last decades technology has liberated musicians by enabling studio-quality recording and production at increasingly low cost, multiplying many-fold the amount of music available (both excellent and crap).

As illustrated above, this results in a distribution of music taste that is far broader than before, and overall results in significantly greater music consumption than before.

However it also means that there are fewer artists and songs that are massively successful – the curve is flatter as well as broader. For example, music festivals are finding it harder to find artists that are big drawcards to a broad audience. As the music landscape fragments, fewer stand out.

Over time we can expect the curve to flatten and broaden further. Yes there will continue to be a handful of extremely high-prominent acts, such as Lady Gaga today, but far fewer than before. Since the dynamics of the music industry have always been based on hits, this makes making money from music even harder than before.

On the other hand, consumers win. It is possible that the greater challenges of making money from music will shrink the availability of new music, but I suspect only marginally. For those who have a decent audience, new models are emerging, such as Björk’s new ‘app album’.

I think a world of far greater music diversity, and far better access to it, is a wonderful thing.

Qantas Business Radio: why crowdsourcing will drive the future of organizat... Keynote: Creating the future of retail shopping precincts: The Power of Community...
Scroll to top
This website or its third-party tools use cookies to improve user experience and track affiliate sales. To learn more about why we need to use cookies, please refer to the Privacy Policy.