The latest issue of the annual publication Media Trends + Strategy magazine kicks off with a feature article I wrote titled The Decade Ahead for Media. Here is the article:

The decade ahead for media

While media as a whole will undoubtedly flourish, there will be substantial shifts in many aspects of media, including the channels through which media flow. Print newspapers are trending towards irrelevance, with almost-free tablet computers coming soon, and the intrinsic revenue/cost models for the industry not stacking up in coming years, other than in specific areas such as highly local publications or free commuter papers. Broadcast TV in developed countries will have to deal with the current and inevitable shift to real-time and on-demand TV and video content being delivered over the Internet. While existing players can reposition themselves into the emerging space, they need to change their cost structures and deal with proliferating competition for viewers’ attention.

One of the key uncertainties in the media industry in coming years is how well established media organisations understand and deal with the pace of change, and take the sometimes radical steps required to transform themselves and grasp the massive opportunities available. Some of these organisations will successfully make the transition into a very different media landscape. The reality is that some will not. 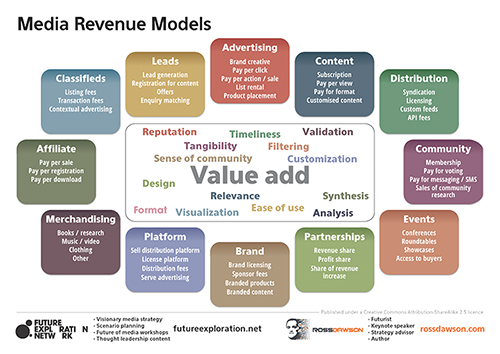 In many case media revenue models need to move beyond the traditional ones of subscription and advertising, though there will be increasing opportunities to create subscription models on new platforms, sometimes by aggregating or being aggregated into consumer-oriented channels. Many new revenue models will be based on community, notably by driving transactions rather than simply exposing the audience to advertiser messages. Since the cost dynamics of more local or targeted media engagement are less attractive, multi-niche media models will rise, in which resources are applied across a variety of markets to build decent returns. Many successful media organisations will move closer to transactions, through mechanisms such as pooled buying, lead generation, and vendor partnerships.

We have seen just the beginning of the shift to social media. Social news curation will soon be mainstream, in which possibly the majority of people select their news, video, or audio consumption through the collective opinions of their personal networks, rather than going to individual media outlets. While we are hardly going to see the death of passive media, an increasing proportion of media consumption will involve sharing and conversation with friends and peers.

We can be sure that media, in its broadest sense, will absolutely drive tomorrow’s economy. To take advantage of that, today’s media industry needs both to reposition around a rapidly evolving pool of media channels, and ensure it takes a commensurate share of the value it creates. There is a bright future for those organisations that are swift and nimble enough to grasp the opportunities ahead.

Ross Dawson is globally recognised as a leading media futurist, keynote speaker, strategy advisor and best-selling author. As Chairman of Future Exploration Network he speaks and consults around the world on the future of business and media. His blog (www.rossdawsonblog.com) is ranked as one of the top business blogs in the world.

Crowdsourcing management reviews: doing it before staff do it for themselve... 5 important ways in which crowdsourcing creates business value
Scroll to top
This website or its third-party tools use cookies to improve user experience and track affiliate sales. To learn more about why we need to use cookies, please refer to the Privacy Policy.