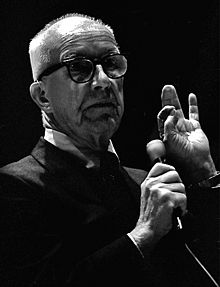 When I’m asked who my favorite futurists are, usually the first person who springs to mind is Buckminster Fuller. He was an extraordinary inventor, a true visionary who had a massive impact on how we think, and was way ahead of his time.

You can discover more about his work from the Buckminster Fuller Institute.

Today I was looking again at some of his work, and was struck at how prescient his thinking was. Five decades ago he was talking about many of the issues that are today dominant in our considerations of the future. He brought deep and powerful insights that are exceptionally relevant to us today, not least to the future of work. His work remains powerful and useful.

I have taken a selection of quotes from his work (from WikiQuotes) below that are still highly relevant today. Let us learn from his wisdom.

Talking about Massive Open Online Courses and the pull of education:

Children, as well as grown-ups, in their individual, glorified, drudgery-proof homes of Labrador, the tropics, the Orient, or where you will, to which they can pass with pleasure and expedition by means of ever-improving transportation, will be able to tune in their television and radio to the moving picture lecture of, let us say, President Lowell of Harvard; the professor of Mathematics of Oxford; of the doctor of Indian antiquities of Delhi, etc. Education by choice, with its marvelous motivating psychology of desire for truth, will make life ever cleaner and happier, more rhythmical and artistic.
– 4D Timelock (1928)

Talking about the role of humans versus computers:

“Man is going to be displaced altogether as a specialist by the computer. Man himself is being forced to reestablish, employ, and enjoy his innate “comprehensivity.”
– Operating Manual for Spaceship Earth (1963)
[Note: Fuller was an apostle of “comprehensive thinking” – thinking about the whole and not just the parts]

Talking about the very current debate on a basic living wage as automation replaces jobs:

We must do away with the absolutely specious notion that everybody has to earn a living. It is a fact today that one in ten thousand of us can make a technological breakthrough capable of supporting all the rest. The youth of today are absolutely right in recognizing this nonsense of earning a living. We keep inventing jobs because of this false idea that everybody has to be employed at some kind of drudgery because, according to Malthusian-Darwinian theory, he must justify his right to exist. So we have inspectors of inspectors and people making instruments for inspectors to inspect inspectors. The true business of people should be to go back to school and think about whatever it was they were thinking about before somebody came along and told them they had to earn a living.
– “The New York Magazine Environmental Teach-In” by Elizabeth Barlow in New York Magazine (30 March 1970), p. 30

Talking about the Circular Economy:

Pollution is nothing but resources we’re not harvesting. We allow them to disperse because we’ve been ignorant of their value.
– As quoted in “The View from the Year 2000” by Barry Farrell in LIFE magazine (26 February 1971)

Talking about augmentation and extension of our senses:

Up to the Twentieth Century, reality was everything humans could touch, smell, see, and hear. Since the initial publication of the chart of the electromagnetic spectrum, humans have learned that what they can touch, smell, see, and hear is less than one-millionth of reality. Ninety-nine percent of all that is going to affect our tomorrows is being developed by humans using instruments and working in ranges of reality that are nonhumanly sensible.
– R. Buckminster Fuller on Education (University of Massachusetts Press, 1979), p. 130

Describing the rise of the living networks:

The new human networks’ emergence represents the natural evolutionary expansion into the just completed, thirty-years-in-its-buildings world-embracing, physical communications network. The new reorienting of human networking constitutes the heart-and-mind-pumped flow of life and intellect into the world arteries.
– Grunch of Giants (1983)

I do know that technologically humanity now has the opportunity, for the first time in its history, to operate our planet in such a manner as to support and accommodate all humanity at a substantially more advanced standard of living than any humans have ever experienced.
– Grunch of Giants (1983)

On everyone’s personal responsibility to shape a better future at a time when our capabilities are massively amplified:

I have to say, I think that we are in some kind of final examination as to whether human beings now, with this capability to acquire information and to communicate, whether we’re really qualified to take on the responsibility we’re designed to be entrusted with. And this is not a matter of an examination of the types of governments, nothing to do with politics, nothing to do with economic systems. It has to do with the individual. Does the individual have the courage to really go along with the truth?
– Only Integrity is Going to Count (1983)

These quotes just brush the surface of the depth of Buckminster Fuller’s work. I will come back later to some of his important themes and work.

How Stories Drive Sharing: 3 Insights on Harnessing the Power of Word-of-Mo... Harnessing the power of innovation: networks are at the heart
Scroll to top
This website or its third-party tools use cookies to improve user experience and track affiliate sales. To learn more about why we need to use cookies, please refer to the Privacy Policy.