Yesterday I gave an executive briefing to a senior team tasked with generating major new revenue opportunities for their organization.

My presentation delved into the drivers of change in economic structure, individual and societal behaviours, the shape of cities, the role of government, and the implications for the elderly of demographic change.

However to kick off I wanted to put the group into a bigger mental frame than they would usually think in, so I ran through the following chart: 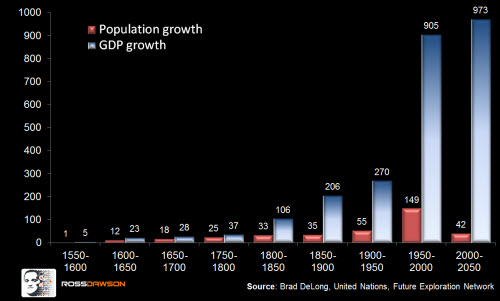 This chart was first prepared for when I gave a keynote to a group of fund managers in 2006. I wrote a post describing some of the background and context to the data.

The second half of the 20th century was an extraordinary time in human history, when global population grew by a factor of 2.5, from around 2.5 billion to well over 6 billion people, and the economy grew 10-fold in the space of 50 years.

Population growth is now slowing dramatically and we are likely to see global population plateauing by the middle of the 21st century (more on that another time).

A key question we face is whether we can sustain the same amazing economic growth of the latter half of the last centure, which was clearly fuelled significantly by population growth, when the number of people and workers on the planet is stopping growing or even shrinking.

We are now almost a quarter of the way into this half-century, so it’s worth reviewing where we are.

The last half-decade has certainly been economically challenging across much of the planet, however there has still been solid growth in the global economy, of course driven by major emerging economies such as China and India.

If we extrapolate that rate of growth over a 50 year period, this would result in 518% growth for a more than 6-fold increase in the global economy.

This figure is significantly less than the estimates shown in the chart above, however still a pretty substantial growth rate given the lower population growth.

Of course there is still massive uncertainty about the future of the global economy, going far beyond the very simplistic and reductionist GDP figures, with not least climate change potentially having a dramatic impact.

However I believe we will see growth rates rise above the trend that we have seen so far this century, driven not just by the rise of emerging economies but also by the shift to the weightless economy and the opportunities of a connected world.

Let’s keep our mental frames sufficiently big, looking at how we can create vastly more social as well as economic prosperity over this half-century and beyond.

Economic structural change is NOT industry compositional change Future Creative Drinks in Sydney on 31 May – hope to see you there!
Scroll to top
This website or its third-party tools use cookies to improve user experience and track affiliate sales. To learn more about why we need to use cookies, please refer to the Privacy Policy.