On Saturday I spoke at Creative Sydney’s Crowds + Collaboration event. I had just been invited to on Thursday to fill in for a speaker who couldn’t make it, but it was pretty easy to do given last week we launched our Crowdsourcing Landscape and I gave two keynotes largely about crowdsourcing (to Cisco and at a regional futures conference in WA). As such I addressed the topic The Future is Crowdsourcing, largely supported by the Crowdsourcing Landscape, as you can see at the bottom of this post.

The other speakers were excellent. In particular the story of Detours and Destinations was extremely inspiring. Highly disadvanted youth were given the opportunity to spend time at the Sydney Opera House creating their own performance. One of their many creations is below.

The artistic director, given the challenge of engaging the participants, got them to tell their own stories and letting them curate and shape what emerged, in essence sourcing the creation from the crowd. It is very difficult to do well, but a great facilitator can achieve it, as appears to be the case here.

The other presentation was from Pip Jamieson and Matt Fayle, who are the creators of creative social networkThe Loop. , This is the platform used for the Creative Sydney 10×10 Project, which I was also involved in. The focus (out of which stems the business model) is for companies to find talented creatives and creative professionals to get work. To support this The Loop provides free portfolio space. What results is a space not vastly dissimilar from RedBubble (based out of Melbourne) though working from a very different intent.

There is some fantastic talent on The Loop, underlining the importance of community. It is doubtless Pip and Matt’s connections and personality which have enabled them to bring together this pool of creative people. When I caught up with Martin Hosking of RedBubble and Mark Harbottle of 99designs the other week they both emphasized that they were as much designer communities as anything else. A lesson that good crowdsourcing usually stems from community.

To round out, here are the slides from my presentation on Saturday (somewhat mangled by Slideshare)

And here is a fantastic photo taken by Halans during my presentation – Halans’ been doing an awesome job of capturing the event. 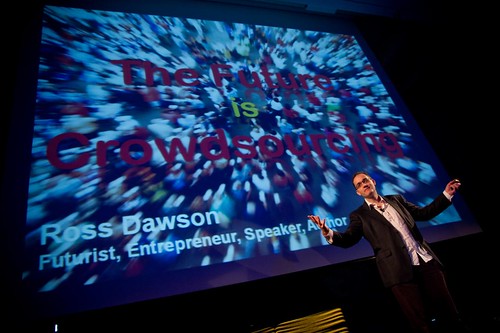 The Creative Sydney 10×10 Project – uncovering the best of Sydney... New flyer on keynote speaking work
Scroll to top
This website or its third-party tools use cookies to improve user experience and track affiliate sales. To learn more about why we need to use cookies, please refer to the Privacy Policy.