This morning I gave the opening keynote at an internal leadership conference of a major Australian retailer, addressing the topic of Embracing the Future.

One of the key issues for the long-term planning of any large organization is the basic demography of the country. While I spent much of my presentation looking at social change, I started by looking at the state of population forecasts for Australia.

A few months ago Australia’s Treasury department foreshadowed the release of the third Intergenerational Report, which examines the impact of population change and aging. The second report, released in 2007, forecast an Australian population of 28.5 million in 2050, however two scant years later the forecast has been revised to 35 million. This would make Australia the fastest-growing developed country in the world.

Let’s look at some of the figures and uncertainties behind these forecasts. While we often hear that “Demographics is Destiny”, in fact demographic forecasts are fraught with uncertainty.

This first image shows the earlier three population scenarios for this century from the government. 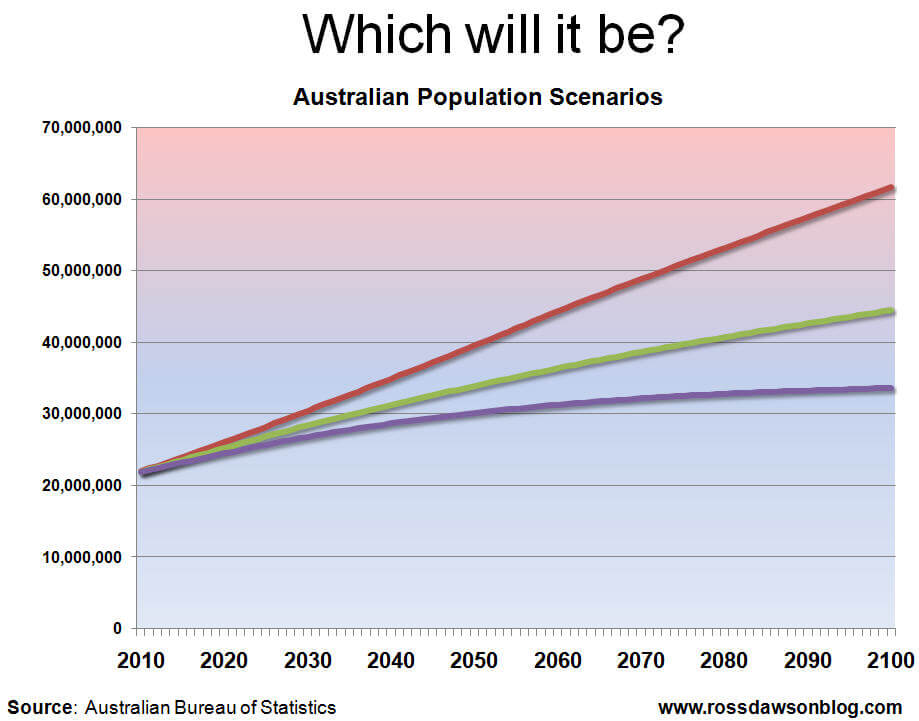 The latest scenarios for global population from the United Nations show an even more extreme divergence in possible outcomes. 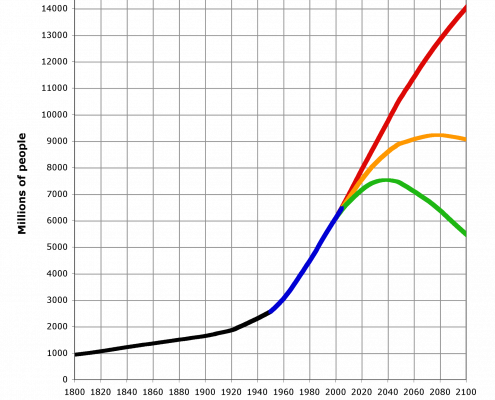 There are three fundamental variables determining total population: fertility rate, death rate (usually expressed as life expectancy), and migration. The uncertainty of all three are currently increasing, in some cases dramatically. Let’s look at these in turn. 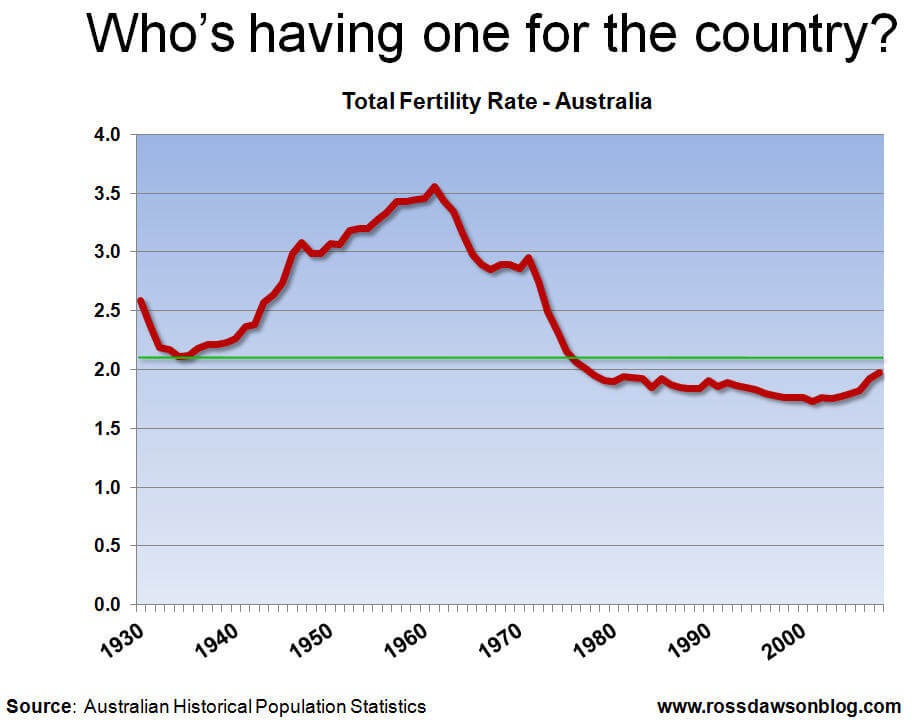 Australia’s fertility rate has followed a similar path to that of many developed countries, with a baby boom in the prosperous post-World War II decades, followed by a rapid fall to below replacement rates. However it never fell as low as, for example, Southern and Eastern European countries such as Italy, Spain, Greece, Poland, and Czech Republic where it has plunged as low as 1.3. Very interestingly, fertility rates have picked up substantially over the last few years, reaching 1.97 in 2008, making Australia one of the most fertile developed countries. The USA’s fertility rate of 2.05 is driven by the high birth rates of its migrant population. The question here is whether the recent rise will be sustained. The UK’s fertility rate has also risen to the highest levels for decades. There seem to be no good explanations for these rises in fertility rates. As such, while a return to the well sub-2.0 rates of the last decades seem likely, we cannot rule out fertility rates increasing over a sustained period. 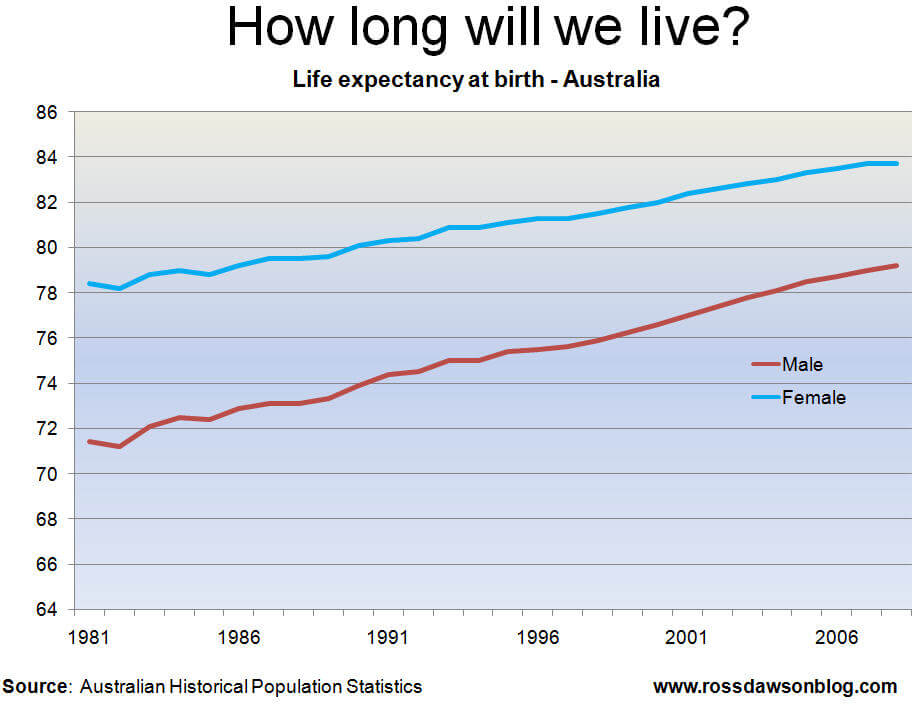 Increases in life expectancy appear to be one of the most predictable trends around. Statistics from other countries that go back over two centuries show the same consistent increase in life expectancy. The major uncertainty (barring unforeseen eventualities – see below) is on the upside. Current research into gerontology, combined with the potential of customized treatment stemming from genomic research, could increase lifespan significantly within the next couple of decades, skewing both total population figures and age distributions. 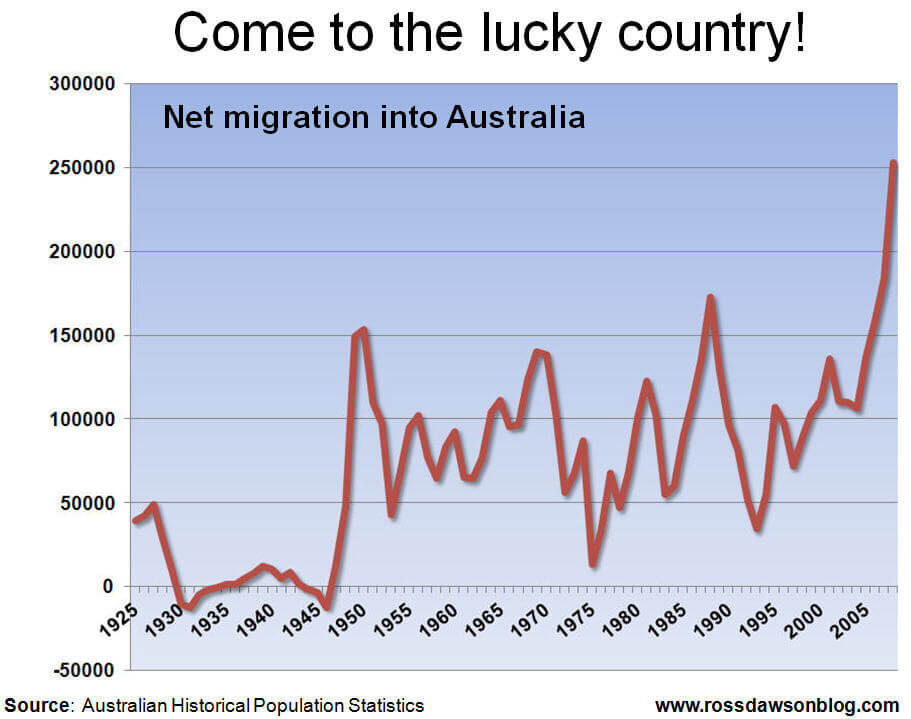 The demand for immigration over time is driven by relative (perceived) affluence and the devastation caused by war or natural disasters. The supply is a tap determined by government policy (or the ability to evade government controls). This in turn is driven by social attitudes. Some of the primary drivers of voting behaviors in many countries today are the espoused immigration policies of the political parties.

Last year saw significantly the highest net migration into Australia in history. This foreshadowed the recent increase in forecast population, which is based on average migration of 180,000 annually, compared to the previous assumption of 130,000. While many in Australia (generally the ‘pro-business’ lobby) are strongly in favor of increased immigration, many others (including the green camp, who believe that the country cannot support a sharply higher population) are strongly against. How these social attitudes play out over coming years, particularly as we experience increased immigration and diversity, is extremely unpredictable. However they will inevitably flow through to political process and action.

No population forecasts take into account unexpected events such as pandemics, terrorism, natural disasters, or devastating climate change. The chances of these having a substantive impact on total population figures are probably relatively low. However if we recall that the death toll of the 1918 Spanish influenza is estimated at 50-100 million people, and many experts believe pandemics are close to inevitable (and will be spread far more rapidly around the world than any previous maladies), we cannot neglect these scenarios entirely.

In short, it appears that we are moving into a time of heightened uncertainty on demographic trends and outcomes, for Australia in particular though also for other countries. Scenario planning is a highly relevant tool for these times, and at Future Exploration Network we will be focusing on scenario approaches in our work with clients on how best to respond to these shifts.