We have just launched our Implementing Enterprise 2.0 report, encapsulating in a neat package (almost) all you need to know to create massive value with Enterprise 2.0 technologies and approaches in your organization. 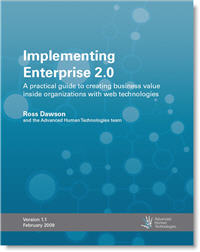 Our www.ImplementingEnterprise2.com website includes a number of free chapters and resources, which I’ll feature in more detail here later, as well as ordering information.

One of the key aspects of the report is that it is versioned. Version 1.1, available on Amazon.com, includes just a few small fixes from the 1.0 version that we produced for a limited audience. Now we can get down to the more significant modifications that will eventually see this as a highly refined and revised version 2.0, 3.0 and beyond.

That evolution will be largely based on feedback from readers. We will soon introduce a feedback forum on the report website to gather suggestions and input, though we’re always keen to get ideas in any format.

It in fact makes eminent sense to apply to books the versioning concept that is the foundation of released software. Of course the whole idea of a book is that it is something you invest your all into, and then sit back and rest on once it’s sent off to the publisher or printer. However for many books it would be great to have them versioned, improved gradually over time based both on further insights from the author, and continuing developments in the environment.

I launched this blog in November 2002, to accompany the release of my book Living Networks. The book dealt with a rapidly changing world, but took six months to get through the publishing process, and then remained static. A blog was a perfect accompaniment to a static book to be able to reflect and publish immediately on emerging trends in the living networks.

My first book, Developing Knowledge-Based Client Relationships, was first launched in 2000, and then in a second edition in 2005. I put a lot of energy into it, creating a book that was almost half new material.

However therein lies the key problem with versioning books in a publishing industry based on single releases: every book requires an ISBN, even if it’s very slightly different from another one. A new edition is a new book. Distributors treat it as an entirely different book, and if you’re looking at a second edition, you have no idea if there’s a third edition somewhere or what was different from the first edition. Comments and reviews attributed to old versions will not be linked to newer versions. Links to similar books will not be maintained once a new version is out.

So I’ll need to work within this antiquated publishing system as I version this report. Every new version will have a new ISBN, and not be linked in book distribution systems to other versions. I expect that I will continue to get sales through various distribution channels for old versions even after new versions are out. As such, the book website will be important in providing readers access to the latest version.

I’ll keep you posted as I work out how best to apply versioning to the book industry. I don’t think it will be easy, but I think it is a very important step, which the publishing industry needs to embrace.

mX newspaper: Blogs to conquer the office – prepare for the workplace of the... Launch of Implementing Enterprise 2.0 Framework
Scroll to top
This website or its third-party tools use cookies to improve user experience and track affiliate sales. To learn more about why we need to use cookies, please refer to the Privacy Policy.