I recently completed delivering keynotes in six cities as part of a national roadshow for Optus Business. Optus’ annual client event was a morning event for its clients and prospects in Sydney, Melbourne, Brisbane, Perth, Adelaide and Canberra. The sessions began with my keynote on Surviving and Thriving in a Connected World, followed by Optus executives presenting insight and client case studies on mobility and IP convergence. Each event included an exhibition featuring Alphawest, the ITC services firm Optus acquired a few years ago, and a broad array of Optus Business delivery partner organizations.

Below is the key content from just one of the five sections of my presentation, on the Driving Forces that are transforming a connected world. The rest of the keynote describes in detail what connected business looks like, winning strategies for organizations in a connected economy, and finally the actions that needs to be taken to succeed.

The five driving forces of Connected Business are:

Increasing connectivity is an overwhelming force, shaping society and business. We have come a long way since the first mobile phones that weighed no less than a brick in the early 1990s and the birth of the graphic web browser in 1993. As we shift to pervasive connectivity, giving us access to all the people and information resources of humanity wherever we go, entirely new possibilities are emerging on who we are and how we live our lives. As messages flow rapidly between us, the people on the planet are becoming connected as tightly as the neurons in our brains, giving rise to an extraordinary global brain in which we are all participating.

We can think of it as the acceleration of everything. Our expectations for the time it takes people to respond to messages has shrunk from weeks to days to hours. The value of our knowledge is depreciating at an increasing rate. By every measure, from the number of science and engineering graduates globally, to the amount of information produced, and on to the number of patents filed, the pace of knowledge creation is increasing. Now the extraordinary visibility of innovation and new ideas is further accelerating the pace of change. In the video above XXX shows his idea for using anamorphic representation to create an “iHologram”. He doesn’t know how to do it, just what it will look like. However from the hundreds of thousands of people who saw the video, some will take the idea and do something with it. Ideas proliferate and spark new concepts and actions at an ever-increasing pace. 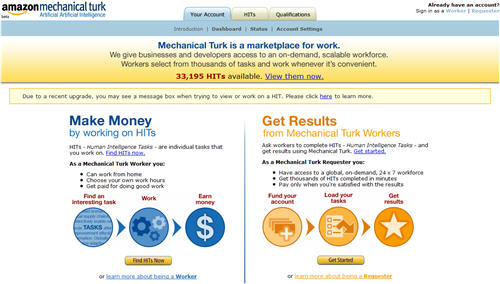 We are shifting to a fluid global economy, based on the ready flow of information and ideas across borders. Amazon’s Mechanical Turk enables companies to engage people across the world to perform simple tasks that can be done better by people than by machines. Business processes are being broken down into elements that are performed partly by computers, partly by people. Web services technologies continue to allow business processes to be broken down into smaller and smaller modules, each of which can be performed anywhere on the planet and then readily integrated. As business processes are distributed across the boundaries of IT systems, organizations, and countries, we are shift to a fluid economy that organizations must embrace if they wish to participate in the vast growth ahead. 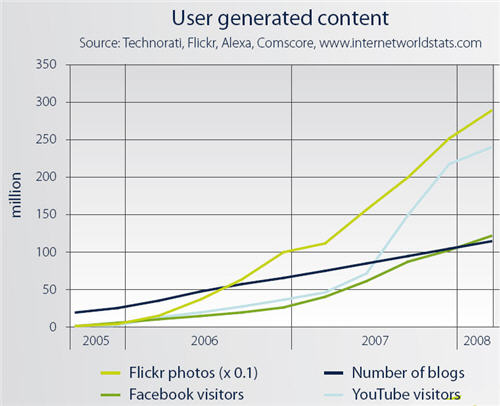 Perhaps the biggest social shift in recent years is towards participation. I think it is an intriguing question whether the rise of enabling web technologies over the last years has shaped our social attitudes, or whether a transformation in social views has resulted in us developing the technologies to support these. Probably both are true, but either way there has been an extraordinary rise in participation, as illustrated in the diagram above (taken from our Future of Media Report 2008), accompanied by increasing expectations of openness and transparency. This massive trend changes not just how companies must engage with their customers, but also how they must organize to tap the degree of participation that their younger (and older!) staff expect.

We are changing the climate of the planet. No-one knows quite what the impact will be in coming decades, however today’s social and political attitudes mean that every organization must focus on reducing their carbon impact. Not only will many customers make buying decisions based on their perception of how environmentally-friendly companies are, but there will soon be direct costs for carbon emissions. As improved communication technologies can increasingly replace not just many air flights but also legions of car commuters, carbon impact will accelerate the shift to connected business, driving video-conferencing, virtual worlds, work gaming environments, and richer forms of tele-commuting.

Scenario Planning – Strategy for the future of global financial servi... New Business Models Need New Approaches to IT
Scroll to top
This website or its third-party tools use cookies to improve user experience and track affiliate sales. To learn more about why we need to use cookies, please refer to the Privacy Policy.