This year BBC is focusing on the future under the theme What If? and has just launched its What If? Visions of the Future competition. 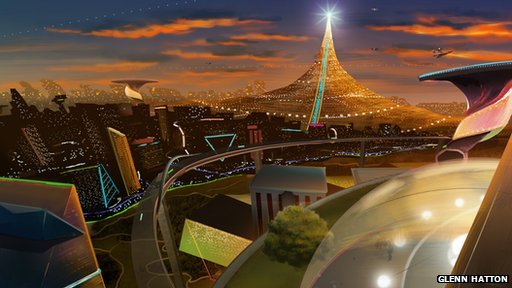 We cannot change the past, but we can visualise the world of the future – the world that we want or the world we want to avoid.

We want you to send us your visual representation of the future.

There are two categories: still images and moving images (up to 50 seconds). So your entry can be a single photograph or drawing, an animation or video, or even a picture or video of a model or sculpture you’ve made. But it must be your own work.

The BBC asked six artists around the world to share their visions of the future to kickstart the competition. The image above is taken from an animation created by Australia’s Glenn Hatton.

I am honored to be one of five international judges who will judge the competition finalists.

The winner of each category will receive a laptop up to the value of £2,500, and of course significant global recognition for their work.

So, read the competition overview, let your visions of the future emerge, and capture them to share with the world.

I look forward to seeing an exceptional array of visualizations of what may come to pass.

What is the future of Learning & Development department? Analysis: US, Australia social network usage flat, New Zealand now the world’s...
Scroll to top
This website or its third-party tools use cookies to improve user experience and track affiliate sales. To learn more about why we need to use cookies, please refer to the Privacy Policy.