Techcrunch has updated its analysis of the valuation of the major social networks globally, based on new usage and advertising spending figures.

As last year when I did the same analysis, the most interesting part of this for me is the relative advertising spending per internet user across countries, and the very strong differences in what are sometimes quite similar economies. 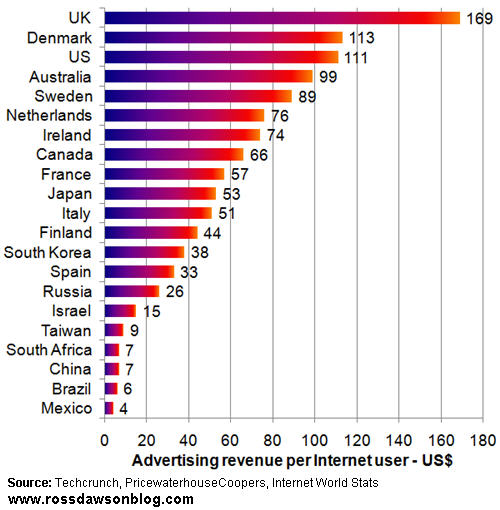 The relative ranking has changed little from last year, though the absolute figures have fallen significantly. Internet advertising spending has essentially been flat over the last year or so, while there has been a solid increase in the number of users.

Techcrunch is using a different data source for the number of Internet users (Internet World Stats instead of Comscore), however is still using the figures from PricewaterhouseCoopers’ Advertising report. Because of PwC’s close affiliation with the Internet Advertising Bureau in most countries, the figures are as good as you’re going to get, despite some methodological problems.

I don’t think there is a lot of evidence to build further on my suggestions last year as to the differences in Internet advertising spend across countries. One of the biggest drivers is both in advertiser and publisher attitudes. In each country there is an ecosystem of advertisers, ad agencies, media buyers, and publishers which together need to shift their ad spend across channels. In the countries with the highest Internet ad spend per capita, many traditional publishers have actively shifted online and introduced their advertisers to the new media.

It will be fascinating to see whether these differentials in Internet advertising will even out over time, as advertising over digital media channels eventually takes a dominant share of total ad spend.

Video interviews with J.B. Holston of Newsgator and Stowe Boyd before Enterprise... US Internet ad revenue down 5% on last year – expect a shorter downturn...
Scroll to top
This website or its third-party tools use cookies to improve user experience and track affiliate sales. To learn more about why we need to use cookies, please refer to the Privacy Policy.