One of the most interesting issues regarding Twitter is its impact on the media and journalism. The Insight Exchange is running a lunch event Twitter’s Impact on Media & Journalism in Sydney on 23 June which promises to be extremely interesting, with insights from among others Mark Pesce, Renai Lemay, Paul Colgan and Corrie McLeod (click on the names to see pre-event interviews of the speakers by Beth Etling) as well as in-depth discussion by all participants.

Below are some of my thoughts on the topic. As an introduction, in the ABC TV segment below Mark Scott, Managing Director of ABC and myself are interviewed about the role of Twitter in media. Mark emphasizes that people want a trusted source for their news, whereas I point to the value of Twitter in breaking news. At the time I wrote more about these different viewpoints on Twitter and media, noting that Scott’s stance “just takes us back to the traditional view that news is only news once a journalist has reported it.”

I see Five Fundamental Factors on how Twitter impacts media and journalism:

In my book Living Networks, released in 2002, I wrote:

The brilliant visionary Marshall McLuhan accurately described the media as an extension of our senses. Your eyes can see what’s happening in your immediate vicinity, your ears can hear what people are saying in the same room as you, but with television and radio as an adjunct to your senses, you can see and hear anywhere around the world. All of the cameras and microphones of the world’s media are an extension of your eyes and ears, and journalists are your personal emissaries to report on their findings and impressions.

Now connectivity is extending your senses to all the connected people on their planet. Media is becoming a participatory sport. You can tap into what any of a vast army of people are seeing and thinking, or contribute yourself to the global flow. This certainly doesn’t mean the end of mass media. Most people will always choose to access a common frame on the world, that gives views of politics, society, and entertainment that provide a basis for interaction and discussion. However the new world of media is at the heart of how the networks are coming to life.

[From Chapter 1 of Living Networks]

This is exactly what is happening today. Twitter is extending our collective senses to tens of millions of people around the world who can all report on whatever they are seeing, making that available to anyone on the planet.

This has been evident in many news events around the world, including the Mumbai terrorist attacks, the plane landing in the Hudson, and most recently the unrest following the Iranian elections. There is no question that we have far richer and more timely information on major and minor events around the world as they happen.

I don’t think anyone thinks that everything on Twitter is the gospel truth. Often information is inaccurate, through misinterpretation or sometimes deliberately. However the vast majority of people are able to make a judgment on the likely accuracy of news – be it on CNN or Twitter – and to take it in the context of other news sources.

First hand reports may need confirmation, but they provide early information which can later be corroborated or complemented by other sources. This is the role of professional journalists and established media, which have the resources, training, and expertise to check information and pull together a balanced view of the story. Twitter absolutely does not obviate the need for professional media – it complements it by providing first-hand reporting from a vast army of people on the ground, which is then filtered and integrated into mainstream reporting. This rigorous next phase of media creation and dissemination is necessary and desirable.

There will be some people who are happy to wait until the mainstream media process the news and release it on the regularly scheduled TV news program or in the newspaper. However these days most people prefer their news fresh.

3. The pressure for faster news and media

There is no question that the quickening pace of communication over the last years, including the rise of Twitter, has heightened our expectation of the timeliness of news. Moreover, I believe that humans’ appetite for news and information is effectively insatiable, so we are never going to get to the point at which news is sufficiently fast and deep.

Since bloggers started to compete with mainstream media for breaking news, the pressure has ramped up on being the first to post. Whoever gets in first with news usually gets the bulk of attention and traffic. With Twitter added to the fray, the competition is even more intense.

The inevitable result, bemoaned by many traditional journalists, is that being correct is subjugated to being first. Attitudes are increasingly that it’s better to be first out and have to correct than to delay too long.

4. Editorial policies and reputation for accuracy

The balance between timeliness and accuracy is ultimately an editorial decision. To what degree are you willing to jeopardize your reputation for accuracy to be first out with the news? Over time different media (mainstream and long-tail) will make and implement their choices, establishing an effective hierarchy of reputation for news accuracy. As such, news that comes from the most trusted sources will be considered to be correct and not need further verification. Other news sources will more often be first out with the news, but the audience will understand that this is not 100% credible. We will all make our choices as to which array of faster or more accurate news sources we will use.

I have written numerous times about the symbiosis of mainstream media and social media– each feeds on the other. I also used this metaphor as a central element of my Future of Media Strategic Framework below. 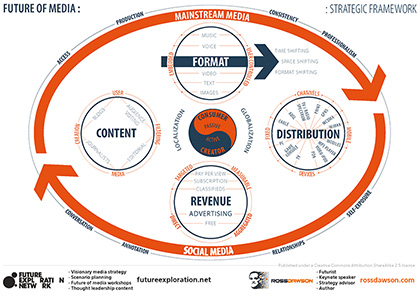 This is and should be exactly the relationship between mainstream media and Twitter. Absolutely, Twitter largely feeds off established media channels. In fact it is rapidly becoming one of the most important ways for people to assess which mainstream media stories they choose to read. Twitterers select what’s most interesting, and then often comment on it, creating real-time conversations out of a static media piece.

However mainstream media is feeding off Twitter too. As Twitter grows its user base it is becoming not just a source of breaking news, but also a deep and broad indicator of sentiment and social change. News stories are not all about cataclysmic events, but also about how we are changing as a society. Journalists who do not look to Twitter as an early indicator or potential source of stories are missing a great opportunity to tap the zeitgeist.

Recommended reading on Twitter’s impact on media and journalism

There is much more to say about Twitter’s impact on media and journalism, so I’ll try to write more about this topic later. For now I’ll close with some recommended reading on what is an extremely important topic for society.

Robert Scoble: The day Twitter kicked CNN’s behind & @ev bought me a whisky

Robert Niles/ Online Journalism Review: So why aren’t you Twittering yet?

Jay Rosen: Help Me Explain Twitter to Eggheads(read the comments)

Mathew Ingram: Yes, Twitter is a source of journalism

David Schlesinger: Twittering away standards or tweeting the future of journalism?

Hanging out with Paul Krugman The emergence of mobile augmented reality
Scroll to top
This website or its third-party tools use cookies to improve user experience and track affiliate sales. To learn more about why we need to use cookies, please refer to the Privacy Policy.