One of the issues that I am increasingly shifting my attention to is how smaller developed economies compete in an intensely connected global economy. For example, in different sectors Ireland, Finland, Israel, and Singapore have had significant success in shifting their economic structure. While the large economies of US, Japan, and Western Europe as well as the emerging BRIC giants face their own issues, there are a particular set of challenges for smaller countries or regions. In addition to the general drivers of economic success in a hyper-connected world, there are a range of specific issues within industries, particularly in the media and technology sectors.

The Department of Innovation, Industry and Regional Development in the Australian state of Victoria recently commissioned an independent review of the screen industry in the state, which goes through to a proposed vision for the future of the industry in the state. Beyond this specific initiatives will be established. The review was performed by consulting firm Nous Group, and I was an ‘Expert Advisor’ on the review. The Screen Industy value chain (as below) on page 14 of the report was developed based on some of my thinking, including my Future of Media Strategic Framework. 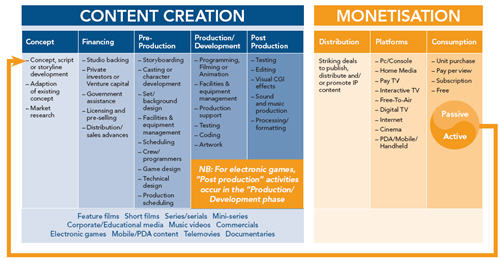 The Victorian Screen Industry Review can be downloaded, and makes for some very interesting reading.

Below is a summary of the key trends identified in the report across sectors, followed by five key issues raised by the report.

I thought I’d take just a few excerpts and points from the report that are relevant to any smaller country or regions in developing their film – or more generally content – industries. These are not intended to be comprehensive, just a few things that struck me in this project.

1. The global screen industry will continue to grow at healthy pace. 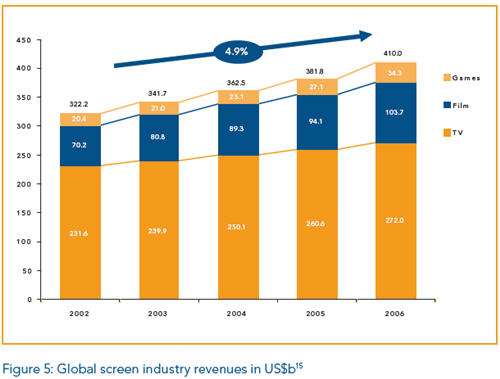 The report shows a very instructive graph showing how the shift of film production to British Columbia reversed sharply when the Canadian dollar rose against the US$. There are many other factors in selecting locations, but cost (and implicitly exchange rates) are critical as an increasing number of regions globally offer the infrastructure and skills necessary for large-scale productions. 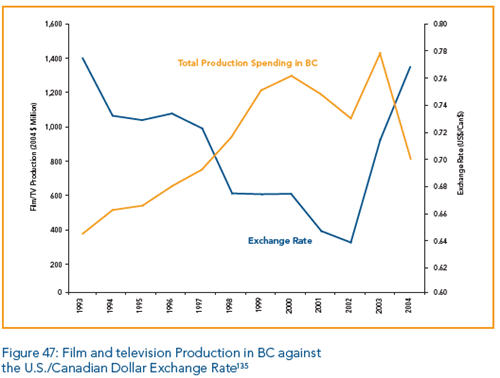 3. Content creation can be broken down into smaller elements.

In a connected world content creation can and will be broken down into smaller elements and activities that can be distributed across the planet and come together to form a final product. That trend is very evident, yet we don’t yet know how far that will go. It is possible that there will still be a high degree of aggregation, with just a few specific tasks being outsourced or relocated, or we could in some instances see a massive distribution of activities, with just a small hub of producers and project managers. I think the latter model is likely to gain significant traction, though we don’t yet know how far this will extend.

4. World class capabilities are essential, and depend on clusters of local talent.

As I’ve often said, world-class capabilities are essential just to play the game. Content creation is an immensely mobile activity, so there is no reason to settle for less than the best. Individuals of the right calibre are only likely to stay in a location if they have peers around them to work with and learn from.

Some forms of screen content production will be lower than they have been, driven by low cost video technology and global outsourcing. In other cases costs will increase. In the latter case capital will often come from the extremely developed US market or be syndicated. However in regional markets capital raising for both small and larger projects is still a significant issue. Governments will undoubtedly play a major role, as they have in many countries. However new distributed models for fund raising will also emerge, as I have been quoted on in Inside Film magazine.

ABC Interview: Google as an advertising aggregator Seven Driving Forces Shaping Media
Scroll to top
This website or its third-party tools use cookies to improve user experience and track affiliate sales. To learn more about why we need to use cookies, please refer to the Privacy Policy.