I’ve been trying to get the time to do reviews of the key panels at the Future of Media Summit, but it’s been tough to get. Here I will kick off with a quick review of the Global Media Strategies panel. The fantastic cast of speakers that I moderated was:

Global media strategies is the one topic that is covered every single year at the Future of Media Summit. One of the main reasons we run an event across two locations simultaneously – in the Bay Area and Sydney – is to gain insights into the differences between media markets. On each side of the event, by comparing experiences across variations in market size, media ownership structure, regulation, culture, broadband and mobile data access etc., we can think usefully about what it takes to build and implement global media strategies.

In the very popular Future of Media Report 2008 that accompanied our event, we included insights such as the expected growth in advertising revenue 2007 – 2010 in both dollar and percentage terms, illustrated below. While the largest absolute growth will be in the US, emerging nations are where the bulk of new value will come from. 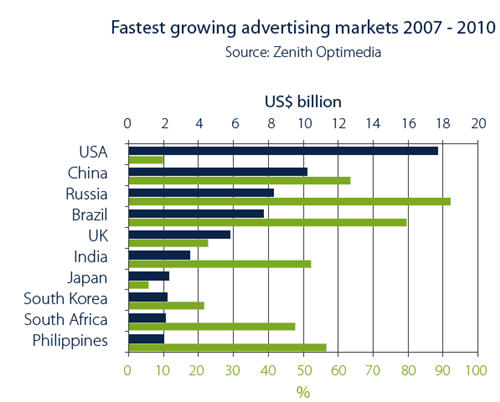 Here are just a few of the insights from the panel discussion that remain from my notes and scattered brain cells.

Language: “English is the TCP/IP of the Internet”

Loic Le Meur made this observation, based particularly on his experience in Europe, where there is both a broad layer of activity in English across the continent, as well as very deep language-specific sites, activity, and discussion within countries. When Loic set up Le Web conference in Paris, he chose to run it all in English. While many locals were unhappy about this, it has enabled people from across the continent to share and connect.

Some of the related issues in global media strategies include how English language abilities vary across countries, the relative affluence of English versus local language-only speakers, and the cost of translation. At last year’s Future of Media Summit, Freddy Mini of Netvibes talked about how they had their users help to translate their product into over 100 languages. User loyalty, particularly in discussion spaces such as blogs, is far higher in local languages.

Differences in culture and usage

There can be both subtle and obvious differences in how different cultures engage online. Craig Blair noted that Australians behave differently from Americans in how they scroll and view pages below fold. Loic described the differences in attitude to blogging from Southern to Northern Europe, where very active bloggers from warmer climes are active bloggers, but the reluctance to share openly diminishes as you head North. In Germany, for example, Wikipedia is huge, but blogging is relatively inactive. (See our Future of Media Report 2006 for analysis showing that the top European languages for blogging were, in order: Spanish, Italian, French, Portuguese).

Chris Tolles observed how in Africa Topix is used for local commentary and discussion rather than news, to the point that Topix has been declared an ‘enemy of the state’ by the Zimbabwean government. Topix gets 125,000 comments a day globally.

American companies that merely translate their U.S.-focused sites into other languages risk losing to homegrown businesses that can better respond to cultural nuances.

Of course by taking a US-centric view on this, it fails to recognize not only that companies from other countries are eyeing the multiplicity of multi-local media markets, and also that the US itself is a target for foreign media companies.

There are a wide range of variables in how to monetize effectively across countries. As I wrote in a recent analysis of advertising revenue per Internet user, the UK and Australia have the highest revenue per user, substantially ahead of for example continental European countries. The panel noted that many US companies set up base in the UK, and then expect the rest of Europe to be easy. In addition to the language problems, the revenue models will often have to be shifted to subscription or other models. Loic’s experience with SixApart Europe showed that the Southern European blogging enthusiasts were happy to pay for blogging platforms. As a side note, the fact that mobiles are commonly linked to payment systems in Spain and other countries means that it can be easier to charge for mobile content.

LinkedIn has taken a strategy of first dominating the US in its space, then going global. This is particularly relevant for a social network, though can apply across other community-based services.

The largest emerging market is clearly China. As Willie Pang noted, it is difficult to export content to China given that the cost of creating content there is one tenth of that in Australia. In India there have been success stories in selling content into the country, partly based on the different range of local languages, including English. The panelists agreed there will be a time when a large Chinese Internet firm successfully moves onto the global stage.

If you were there please add any other thoughts from the session.

New LinkedIn deals – LexisNexis and Xobni – extend the reach of... New SEC guidelines: blogs can be used for investor disclosure – CEO blogging...
Scroll to top
This website or its third-party tools use cookies to improve user experience and track affiliate sales. To learn more about why we need to use cookies, please refer to the Privacy Policy.