Not surprisingly the US, EU and UK were at all time highs at the most recent index point on October 31, 2016, just before the US elections and with no clear direction post the Brexit vote, but Chinese economic policy is also highly uncertain. 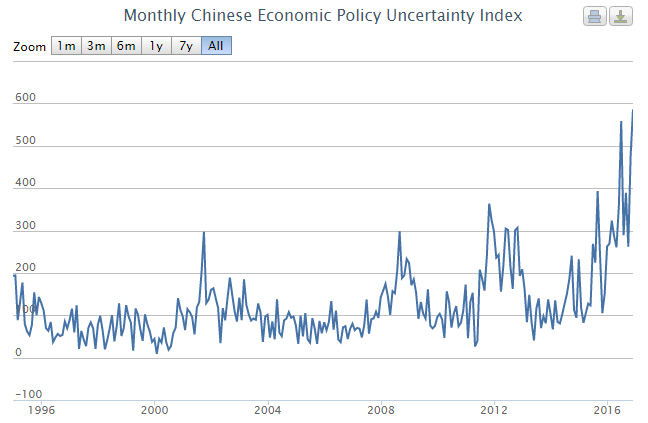 Uncertainty should be a critical input into decision-making, yet there have been no good measures of uncertainty available. Stockmarket volatility is a proxy for economic uncertainty, but is often driven by market factors more than macro-economic outlook.

The Global Economic Policy Uncertainty Index only covers a portion of business and even economic uncertainty, but when economic policy is highly uncertain, that uncertainty flows through to the broader economic outlook.

Analysts at French bank Société Generale have pointed out that while sovereign credit spreads have usually closely tracked the index, they have decoupled to an exceptional degree over the last months, leading to SG’s (often bearish) global strategist Albert Edwards describing this as “one of the scariest charts I have seen for a very long time”. 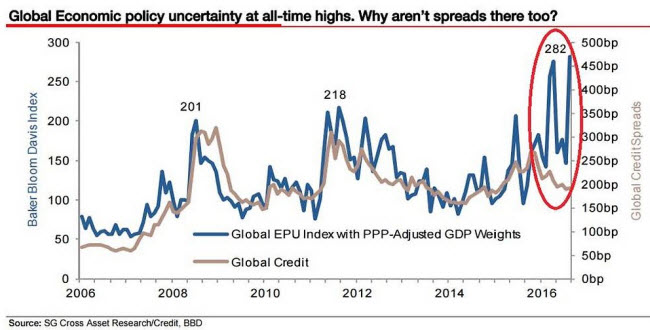 As remarkable are the increases in US and some other stockmarkets in the face of extremely high uncertainty on not just economic policy, but also trade and geopolitics.

Global uncertainty seems unlikely to abate in the near-term, though it is feasible that the Trump administration will move to a degree of predictability over the next half-year, and we will see more clarity on not just Brexit, but the broader implications for the EU.

One of the values of the index is simply allowing decision-makers to frame economic uncertainty as a factor in their strategies and decisions, and to support the use of scenario planning and other foresight tools to make effective decisions in uncertain times.

Uniquely human capabilities will be at the heart of job creation as automation...
Scroll to top
This website or its third-party tools use cookies to improve user experience and track affiliate sales. To learn more about why we need to use cookies, please refer to the Privacy Policy.