Since the 1990s I have been applying network analysis to help understand the development of technology, business, and society. In 2002 I wrote the book Living Networks to describe how networks are moving to the center of our world.

Over the years I have analyzed the network characteristics of many domains, including organizations, industries, influence, business relationships, innovation, decision-making and more. I am now coming back to spend more time exploring how network analysis can provide us with useful insights.

To kick off a forthcoming series of network analyses, we have done an analysis of prominent futurists on Twitter who are included on my Futurists Twitter list.

Here is an image of the analysis, with an explanation below. 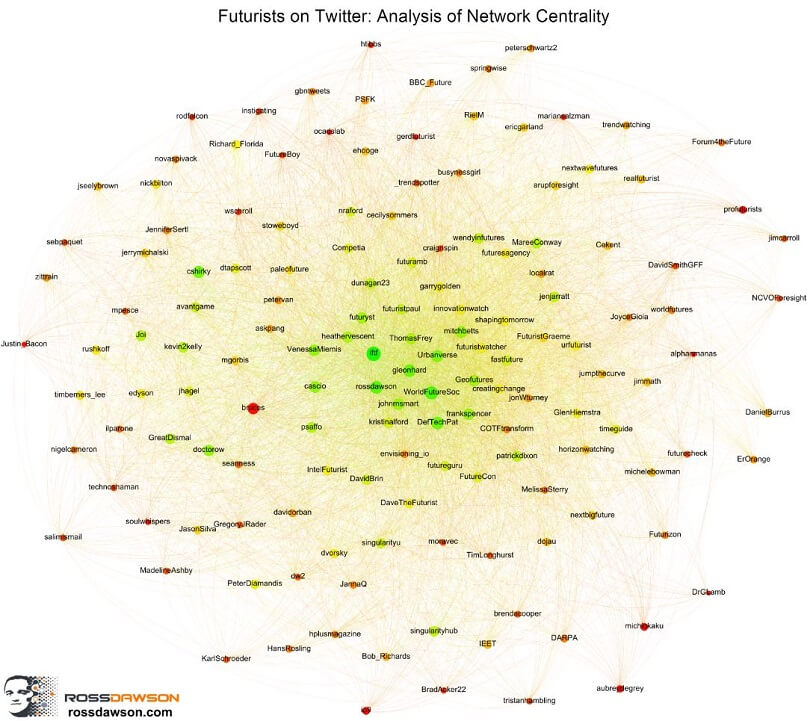 Each node in the graph represents a futurist’s twitter profile. A line connecting two nodes represents a follower relationship. On average each user follows and is followed by 37 other people.

Authority reflects importance based on quality and connectedness of followers.

Centrality is a broader concept, reflecting the time it takes for a message sent by that user to reach everyone in the network. More connections mean faster propagation and higher centrality.

In this chart centrality is shown by color (green most central) and authority by the size of the node. As these are related concepts, nodes with the same color tend to have similar size.

The network is fairly well connected, showing a relatively “flat” social structure with no established hierarchy.

The 40 highest authority Twitter profiles in the network are:

Why social media oversharing may NOT ruin your career Using social network analysis to uncover authority and centrality
Scroll to top
This website or its third-party tools use cookies to improve user experience and track affiliate sales. To learn more about why we need to use cookies, please refer to the Privacy Policy.