Flipboard and Paper.li are two of the hottest properties in media today. Over the last six weeks they have taken social news curation to a new level. This will undoubtedly soon spawn hordes of competitors, while these leaders in the field continue to evolve their offerings. The result will be that we all have far better access to the news that we want from world of infinite information.

Flipboard was launched on July 21, at the time announcing that they had received $10.5 million in funding. For several weeks it was ranked one of the top few free iPad apps in the News category in US, UK, and Australia, attracting massive interest for what it calls a “social magazine”.

Paper.li has been around a bit longer, but has just taken off properly in the last few weeks, as the chart below illustrates. 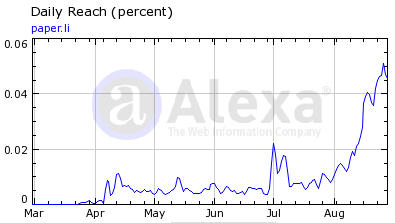 While Flipboard also offers various topic filters, the most interesting aspect of the app is that it can select news items based on what is shared by your Facebook friends and who you follow on Twitter.

I showed video below at the iPad Strategy Workshop I ran last week at the Newspaper Publishers Association conference in Sydney to explain the idea of social filtering.

Paper.li, a Swiss startup which has now been funded by Kima Ventures (founded by Xavier Niel who will shortly co-own Le Monde), also selects news items based on social networks, however only uses Twitter feeds. It is currently more powerful than Flipboard in this regard, as you can use any person’s Twitter followers or any public Twitter list to create your news. See for example the Twitter Ross Dawson daily created by paper.li or create your own in a moment.

One of the ways that paper.li has gained traction over the last weeks is by identifying the main contributors to the curation of each edition, and tweeting their names along with the link to the personal newspage. This consistently exposes the more influential people on Twitter to paper.li.

This is hardly a new concept. I have been writing about “collaborative filtering” since 2002, and in 2006 in the context of blogging wrote that:

Blogs are collectively a mechanism for us to discover what we as a society (or subset of it) find interesting and useful. Even if there were no useful content in blogs (which of course is also nonsense), their collective function of collaborative filtering is an extraordinary bound forward for the world of media.

The far broader uptake of Twitter and Facebook than blogging, and the fact that sharing of links and articles is commonplace (millions of shared links each month), mean that using these as a source of social filtering of the news is far more powerful than what we had before.

I have also described how tools such as Tweetmeme and Topsy have used Twitter to identify prominent news stories, however these are of limited use because they use the aggregate of all users of Twitter, a median which is unlikely to be close to any individual’s interests. The obvious next step was to create socially filtered news based on an individual’s social network.

We have reached that point. This opens the door to an array of increasingly refined services to select news based, not on our own interests as such, but those of our social networks and people we admire.

As such, the (vastly overstated) perils of the “Daily Me” in which we get absorbed in our navels are transcended, and we are exposed to the diverse interests of a (hopefully) diverse and interesting group. This is where news is going.

There are many rich issues to deal with in there, including intellectual property and revenue supporting those who are creating the news, so I will no doubt be writing more on this topic.

Visualization of top iPad News apps in Australia 7 Shifts: The Future of Social Media and Internal Communications
Scroll to top
This website or its third-party tools use cookies to improve user experience and track affiliate sales. To learn more about why we need to use cookies, please refer to the Privacy Policy.