You (or your favorite charity) can benefit from your influence! To find out how, read on…

One of the key themes of Future of Influence Summit, on next week in San Francisco and Sydney, is ‘business models for influence and reputation’.

There are many angles to this particular topic, including:

* Will it be possible for individuals to effectively monetize their influence and reputation?

* What new mechanisms will allow people to make money from the influence?

* How will influence intersect with spending on advertising? (some of the leading players in this space will be speaking at the Summit)

* What are business models for the measurement of influence and reputation?

I recently wrote about Sponsored Tweets, which is one of a number of platforms for people to make money by tweeting sponsored messages and links. There has been extensive discussion on this concept, with a high level of polarization in the community as to whether or not this is a good idea (see for example the comments on Mashable, and thoughts from David Risley, White Hat Crew, and AdWeek).

In the spirit of experimentation and learning how paid influence may work, we are introducing a rewarded tweeting system for promoting Future of Influence Summit. Here is how it works:

1. People using an approved discount code get 25% off the full price of registration (US$199 in San Francisco, A$600 in Sydney). For any registrations with that code, an additional 5% of the registration fee (US$10 for US, A$30 for Australia) is paid to you (or your favourite charity).

END_OF_DOCUMENT_TOKEN_TO_BE_REPLACED

Earlier this year Bernardo Huberman and colleagues at HP’s Social Computing Lab did an analysis of Twitter networks, resulting in the article Social Networks that Matter: Twitter under the microscope.

They studied a random sample of 300,000 Twitter users to gain insights into how they communicated and connected. There were a variety of insights from the research, including the relationship between Twitter activity and number of followers.

Source: Social Networks that Matter: Twitter under the microscope

The final conclusion of the paper was:

Many people, including scholars, advertisers and political activists, see online social networks as an opportunity to study the propagation of ideas, the formation of social bonds and viral marketing, among others. This view should be tempered by our findings that a link between any two people does not necessarily imply an interaction between them. As we showed in the case of Twitter, most of the links declared within Twitter were meaningless from an interaction point of view. Thus the need to find the hidden social network; the one that matters when trying to rely on word of mouth to spread an idea, a belief, or a trend.

This is of course hardly a surprising outcome. Having hundreds or even thousands of Twitter followers does not imply a strong relationship, just as anyone with over a thousand Facebook friends will not necessarily be influenced by all of them.

END_OF_DOCUMENT_TOKEN_TO_BE_REPLACED

While online technologies have transformed the media along many dimensions, one of the most important ways of understanding this is in how the news cycle has changed.

In the old days news was broken on real-time channels such as radio and TV, reinforced and pushed out to a broader audience through newspapers, discussed again in chat shows, and sometimes had life added to the news with updates or responses.

Today, while elements of that cycle remain, much of it has changed. Twitter has had one of biggest impacts on the news cycle, firstly by often being the first media to break news, in offering a discussion forum around mainstream media coverage, and amplifying stories that have appeared in traditional formats.

I stumbled across a couple of interesting graphics and analysis by Samuel Degremont at Burson-Marsteller Paris who shows some of these changes visually.

Click on the images to see them in full size and read Samuel’s detailed discussion (in French).[UPDATE:] Here is the blog post translated into English. 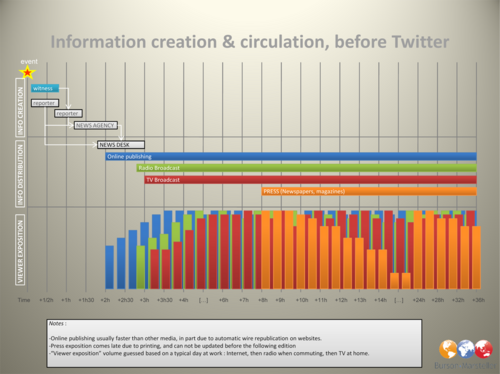 END_OF_DOCUMENT_TOKEN_TO_BE_REPLACED

Twitter has just announced the first of a series of changes to how retweeting is incorporated into the Twitter platform, called Project Retweet. This is significant in how influencers make content popular, one of the key themes of the upcoming Future of Influence Summit.

Retweeting (forwarding someone else’s tweet to all of your followers) has become central to how Twitter is used. This user-invented behavior means that Twitter has become an extremely strong amplifier of the dissemination of interesting content.

It also provides a very good indication of people’s influence and credibility. While Twitter follower numbers are very crude a proxy of influence, it is far more effective to see how much people are prepared to forward someone’s messages. High follower numbers does not necessarily result in lots of (or any) Retweets. However if someone is consistently and diversely retweeted, they must be saying interesting things, or more often, pointing to interesting content.

END_OF_DOCUMENT_TOKEN_TO_BE_REPLACED

Sponsored Tweets has just launched, providing a sophisticated pay per tweet system. Mashable has a detailed review of Sponsored Tweets, including how disclosure is handled.

The Sponsored Tweets platform works by giving advertisers the ability to create campaigns and select, invite, and approve Twitterers of their choosing to participate in their sponsored campaigns. On the flip side, Twitterers can set their pay rate and find opportunities to tweet on behalf of advertisers and get paid per tweet and/or click.

Of course, IZEA’s attempting to cover the disclosure and ethics and portion with their Disclosure Engine software that automatically detects whether or not the appropriate hashtag or text is included. According to IZEA’s CEO, Ted Murphy, “disclosure is systematically enforced” and adheres to FTC and WOMMA guidelines.

This is the first substantive platform in what will undoubtedly become a crowded space. How prominent twitterers and their followers will respond to this is an unknown.

END_OF_DOCUMENT_TOKEN_TO_BE_REPLACED

Associated Press has just released a story titled Is Twitter the news outlet for the 21st century? which examines the role of Twitter in the news cycle.

It examines the role Twitter played in the news of Michael Jackson’s death, in the Iranian election, and in the Mumbai terrorist attacks, and goes on to quote tweeters such as Ashton Kutcher and Lance Armstrong, and commentators including TechCrunch and Andrew Keen to explore how Twitter is changing the news landscape. It also draws on my comments from an extended interview:

“Twitter absolutely changes the media landscape,” said Ross Dawson, author and communications strategy analyst. “I like to refer to Marshall McLuhan’s description of media as `an extension of our senses.’ Now, Twitter is extending our senses to tens of millions of people who are often right on the scene where things are happening.”

My views are expressed in more detail in a recent post How Twitter impacts media and journalism: Five Fundamental Factors, which reviews in particular the role of Twitter in breaking news.

I’ve had a few other thoughts on the topic recently so will post more on this later.