Jeremy Stoppelman, CEO of Yelp, is in Australia for the launch of Yelp Australia. I was invited to interview him on Monday (embargoed until today) as part of a major media campaign to kick off the site.

Australia is the 13th country where Yelp has launched, with up until now all the action outside North America being in Europe. Stoppelman said that they are patient and take the time necessary to get quality data from the outset, so that users’ initial experience is positive.

In this case Yelp in July announced an exclusive deal with Sensis, the Telstra subsidiary that operates the Yellow Pages in Australia. This deal provides Yelp with the initial data to launch, plus a partner for monetization, with Sensis’ sales staff offering customers Yelp advertising options. Local search is a highly sales-intensive business, so the Sensis deal means Yelp can effectively build presence and monetize with limited local staff. It is in the process of hiring community managers in Melbourne and Sydney, where it is initially focusing.
END_OF_DOCUMENT_TOKEN_TO_BE_REPLACED

Today influence ratings service Klout significantly changed its rankings. Last week Klout CEO Joe Fernandez announced there would be changes, saying “a majority of users will see their scores stay the same or go up but some users will see a drop”. It seems that was not correct, and rankings levels have been revised such that most people’s scores go down. The results appears to be plenty of unhappy people.

Before I offer a few thoughts on this, it’s worth addressing those who say they couldn’t care less about their Klout score. It is absolutely fine, and quite possibly the most appropriate response, not to care a jot what number a service happens to attribute to your influence.

I’ve written extensively on this blog about influence and influence networks over the last six years, and in fact our Future of Influence Summit 2009 had Klout CEO Joe Fernandez and other luminaries of the emerging influence space speak on the business models for influence and reputation panel.

The reason is that, like it or not, the measurement of influence and reputation is one of the most important changes we are seeing in society. We see the ‘reputation economy’ as one of the ExaTrends of the decade.

In a world in which influence has become completely democratized, having measures of influence and reputation will drive many facets of society. Of course, the validity of the influence measures we use is a different matter, but an increasingly important one.

Here are a few quick thoughts on the changes:
END_OF_DOCUMENT_TOKEN_TO_BE_REPLACED

This morning I gave the opening keynote for an internal future strategy session at a large insurance company. A group of 40 executives from across the organization, as part of a six month program, are spending two days immersing themselves in thinking about how the structure of the economy could change in the years and decades ahead, and the implications for their business.

My presentation gave a very big picture view of selected elements of the economic landscape that could result in a substantially different business environment.

One of the topics I covered was alternative currencies, including virtual currencies, Bitcoin and other anonymous currencies (more on that another time), and the idea of attention, reputation, and other intangibles as currencies.

Over the last years I have certainly frequently discussed the reputation economy, influence economy, and also the economics of attention.

However the idea of intangibles such as these acting as currencies is a step further, suggesting they can replace financial transactions. Is this a valid idea?
END_OF_DOCUMENT_TOKEN_TO_BE_REPLACED

How many LinkedIn requests are you getting?

Very likely significantly more than you were getting just a few months ago.

LinkedIn reached 100 million users in March. As one of the first 10,000 users, I early on saw the potential of a purely professional social network.

It consistently grew in size and user value over the years, however now that everyone is piling on to the LinkedIn bandwagon, the value of LinkedIn personal connections and networks are decreasing at what seems like an accelerating pace.
END_OF_DOCUMENT_TOKEN_TO_BE_REPLACED

For years I have been writing about reputation and have often said that this will be the decade of the reputation economy. Yet until recently there has been very little in the space. The social media measurement systems such as Klout and PeerIndex have limited data scope and while they talk the language of reputation actually measure influence. Honestly.com is a more pure play in the individual reputation space, but has got limited traction so far.

In recognition of the massive opportunity in the reputation space we have been building a stealth start-up Repyoot (holding page only for now), which will shortly be launched as a limited scale influence ratings engine, with the intention of morphing into a generalized reputation engine.

In developing the service and discussing it with VCs, we have always seen the most obvious latent competitors in the reputation measurement space as Google and LinkedIn. LinkedIn’s recommendation service is a long way from a true reputation service, but it provides a foundation for building one. Google’s depth of data, positioning, and mentality mean that it is well-positioned to develop an individual reputation service. While it is probably not related, I know that Google.org, Google’s philanthropic arm, has been very interested in reputation services for some years, as one of the services that would be of most value in helping developing regions.
END_OF_DOCUMENT_TOKEN_TO_BE_REPLACED

CIO magazine did a nice article titled IIIS: Big Data driving new trends which reviews my keynote and the one immediately after from Steve Duplessie, one of the world’s top analysts on data and storage. It says:

Speaking at the event, co-hosted by Storage Networking Industry Association A/NZ and Computerworld Australia, strategy advisor, author and futurist, Ross Dawson, said “reality mining” — the gathering of data based on the activities of people in a given environment — was a major trend to emerge out of, and contributor to, Big Data.

“If you look at an office environment there is an extraordinary amount of data to look at. For example, what gestures people are making, where are they looking, what conversations are they having, how much are they smiling when they speak to each other?” he said.

“You can literally get terabytes of data out of just a few hours of this. That data is being collected to drive productivity; to design new ways to enhance collaboration and create value inside organisations.”

END_OF_DOCUMENT_TOKEN_TO_BE_REPLACED

Today’s Australian Financial Review has an interesting article titled “Watch out for the spook in the navy blue suit” which looks at how professionals can respond to anonymous slander, quoting me and a few others.

It looks at FirmSpy, which is a site that provides gossip about Australian professional firms, notably law firms and the local arms of the Big 4 accounting firms. FirmSpy provides insights into internal issues such as bullying, sexual harassment, and staff satisfaction and turnover, resulting in Australian Financial Review calling it “Australia’s own Wikileaks for lawyers and accountants”. 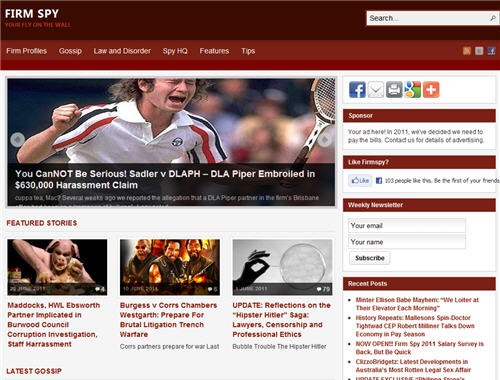 For those accused of wrongdoing, there are limited possibilities for response. The article says:
END_OF_DOCUMENT_TOKEN_TO_BE_REPLACED

Yesterday I updated my Twitter profile after not having changed it for well over a year. The image and words are now:

In my keynotes on social media and success in a connected world I tell the audience that how you are seen online IS your identity. In our social media profiles we can select just an image and a few words that many will use to form their views of you.
END_OF_DOCUMENT_TOKEN_TO_BE_REPLACED

Last week just before I flew to China I did an interview on SkyNews Tech Report about the future of today’s technology.

Topics we discussed in the interview include:
END_OF_DOCUMENT_TOKEN_TO_BE_REPLACED

Much ink and many pixels had already been shed on Britain’s super injunction laws before the last week, but the Ryan Giggs case has pushed this into the stratosphere.

In case you’ve been hiding in a closet, Manchester United star Ryan Giggs was awarded a “super injunction” from British courts, forbidding the press to report that he was alleged to have had an affair with Big Brother contestant Imogen Thomas, or even that they had been forbidden to report on it. Some 75,000 tweets and 1 use of parliamentary privilege later, everyone knows anyway.

This is one of those seemingly small incidents on which major social turning points hinge. So many fundamental issues of society, media, and our future are tied into this that it is difficult to disentangle. Here are a few compact thoughts and critical issues on what is at the heart of this extraordinary situation.

– The current super injunction law was created to respond to excesses of the press
The British tabloids have a tradition as world-leaders in muck-racking and invasion of privacy. Their excesses led to what were probably at the time reasonable laws to limit negative social impact from their activities. However the media landscape of today is barely recognizable from when these laws were enacted in 1990.
END_OF_DOCUMENT_TOKEN_TO_BE_REPLACED