Tomorrow morning I give the opening keynote at Cerner Corporation’s Leadership Forum, which brings together a select group of senior executives from hospitals, healthcare and government.

Below are my slides for the presentation. Note that these are designed to accompany my speech and are not intended to be useful as a stand-alone presentation. However a few summary thoughts on the topic are presented below.

A few quick reflections on the global health economy and where it’s heading:

1. The health industry has been largely immune to the price drivers of other industries

Health spending as a proportion of GDP is on a long-term uptrend in all developed economies. Many of the drivers of lower prices in other industries, such as supply chain efficiencies, globalization, transparency, and new entrants have had relatively little impact, largely due to the systemic nature of vested interest in the status quo. However the pace of change in the structure of health economy is accelerating.

END_OF_DOCUMENT_TOKEN_TO_BE_REPLACED

My interview is in the document here. I’ve also posted it as text below (pre-editing) as it may be easier to read.

END_OF_DOCUMENT_TOKEN_TO_BE_REPLACED

Continuing my live blogging of the MegaTrends conference before my keynote this afternoon, there are two sessions on the economy: a presentation from the Ministry of the Economy, and a panel of the chief economists of leading banks.

The UAE Minister for the Economy couldn’t make it, so the Director-General of the Ministry presented his speech. Most interestingly, he said that they believe that the worst of the crisis is over. Government spending is up 30% on last year, and infrastructure spending is continuing as planned. A new government body will be established this year to provide more consistent and accurate economic data.

Views from the panel:

While things seem to have been bottomed in UAE and the worst is behind us, not prepared to call a quick recovery. Apparently 70% of projects in the country are real estate related, which is not appropriate. The downturn could be a blessing in disguise if it shifts investment into infrastructure that will drive productivity, away from a focus on real estate. There will be limited negative impact from UAE’s decision not join the GCC monetary union.

END_OF_DOCUMENT_TOKEN_TO_BE_REPLACED

Below are my slides for my keynote at the MegaTrends conference at Abu Dhabi.

As for all my presentations, note that these slides are designed to accompany my speech and not to be viewed on their own, though may still be useful to people who didn’t attend.

For some more detail on the Driving Forces section, see my post on The MegaTrends of Technology, Business, and Society.

In preparing for my keynote at the MegaTrends conference in Abu Dhabi this afternoon I have distilled my thinking into a new visual representation. 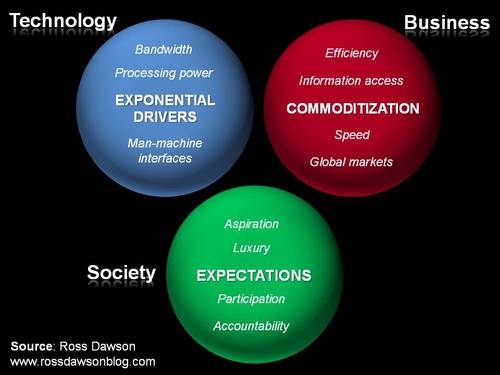 To gain insights the future we need to understand the intersection of three domains: Technology, Business, and Society.

In each of these domains we can distill one driving force that brings together the vast diversity of trends in these domains. These are:

Exponential Drivers. The most important technological drivers are all exponential: increased bandwidth, greater processing power, more storage, and the development of richer man-machine interfaces. These are driving a wide variety of fundamental shifts, not least an intensely connected and increasingly interdependent society and economy.

END_OF_DOCUMENT_TOKEN_TO_BE_REPLACED

The biggest highlight of the MegaTrends conference for me (other than my own keynote :-) ) is the presentation by Paul Krugman, who won the Nobel prize for economics last year, on the state of the global economy. I have a lot of respect for his outlook. Live notes from his speech:

The volume of world trade has fallen off a cliff – down 15% over the last year, the biggest since the Great Depression. In fact there are many similarities to the Depression, but that doesn’t mean that it will be the same. The global economy is stabilizing, but not recovering. Things are getting worse, but more slowly. It *probably* won’t be another Great Depression. Extraordinary declines in output, employment and more. There have been no havens.

So how did it happen? The crisis was far more global than those that point to US mortgage lending as the source. European debt losses will probably be as large as those in the US. There was an epidemic of excessive borrowing across all domains. The IMF now predicts $4 trillion of bad debt.

END_OF_DOCUMENT_TOKEN_TO_BE_REPLACED

I’m at the MegaTrends conference in Abu Dhabi where I will be giving my keynote this afternoon. I’ll be live blogging the morning sessions.

The conference was opened by His Excellency Sultan Bin Tahnoon Al Nahyan, a member of the Al Nahyan Abu Dhabi royal family, and chairman of Abu Dhabi Tourism Authority and several other government bodies.

He said that they have recently re-examined their forecasts, and still predict 15% growth in tourism each year over the next years. Yesterday the local newspaper reported that Abu Dhabi airport arrivals in April were up 12% from last year, suggesting this is feasible despite the downturn. This is strongly supported by the success of Etihad, the Abu Dhabi based airline that was established in 2003, and provides strong connectivity from Europe to Middle Eastern and Asian centers.

As mentioned the other day, one of the critical issues for the UAE is establishing itself as a hub in this time zone. Dubai and Abu Dhabi, despite their strong relationship, compete for regional activity, particularly in financial services. The UAE pulled out of the GCC (Gulf Cooperation Council) monetary union because Riyadh in Saudi Arabia was selected as the home for the union’s central bank.

Next Monday I do the closing keynote at the MegaTrends conference in Abu Dhabi. The opening keynote will be by Nobel Prize-winning economist Paul Krugman, while I will close speaking on ‘Profiting from Accelerating Change in a Downturn’.

While I will be speaking from a global perspective, I will also be addressing some of the specific issues of the Gulf region and particularly United Arab Emirates

* A highly polarized labor force, with a large very low-cost employment sector populated from the region, and also many global professionals

* Taking advantage of the location between Europe and Asia

Yesterday’s Dubai Chronicle did an article titled GCC Economy could reflect strong over-performance in next economic boom, based on a pre-conference interview with me, as below.

END_OF_DOCUMENT_TOKEN_TO_BE_REPLACED

Tomorrow I am doing the closing keynote for the CPA Week Conference in Perth, on the topic of The Future of Global Business: Implications and Opportunities.

The slides from my presentation are here – as always these are intended for people who are attending my session as they are not designed to be meaningful on their own.

The Future of Global Business: Implications and Opportunities
View more presentations from rossdawson.

I’ll write a few additional thoughts on my speech topic soon – on the run right now.

An overview of my keynote is here .

On Tuesday I spoke at the TEDxAdvance event in San Francisco on Future of the Enterprise. 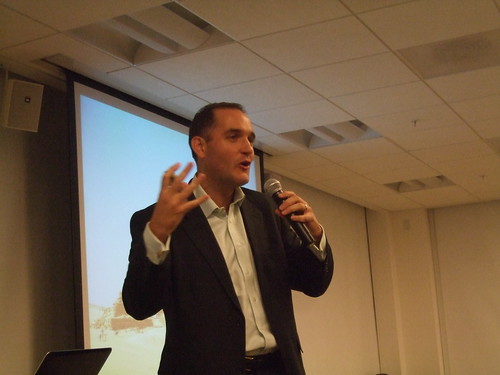 In short, it was a great event, with close to 80 very interesting people in attendance, and excellent energy during the presentations and ensuing conversation over drinks.

I won’t replicate the fantastic write up of the event by Andrew Mager on ZDNet’s The Web Life blog – check it out for a great overview of the proceedings and some of the ideas that flowed through the evening.

A video of my presentation was taken – I hope to post it up here soon.