My wife Victoria Buckley just received a message from Facebook asking her to change the profile image on the Victoria Buckley Jewellery Facebook page, threatening to close the page as it did not conform to its ‘terms and conditions’.

Presumably the were referring to condition3. 7. You will not post content that…contains nudity…. referring to the profile image of a beautiful doll touching one of Victoria’s rings. 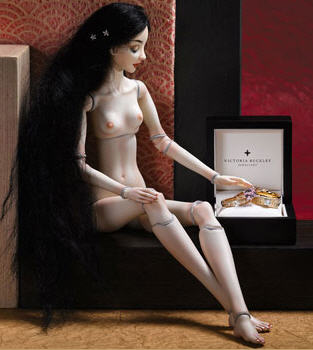 Above is the offensive image. If you go to the Victoria Buckley Jewellery Facebook page you will now see a censored image so she doesn’t get banned, along with her close to 1,000 fans. (Though if you click through to the Photos page and the Ophelia Enchanted Doll collection you can see more stunning images of the doll).

Of course we know that there was a big fuss when Facebook banned breast-feeding photos on the site. But who is going to stand up for beautiful dolls? As Time magazine noted when the Facebook breast-feeding controversy was at its peak, Barbie doesn’t have nipples.

The doll used in the photograph was created on commission by Marina Bychkova of Enchanted Doll, Marina’s dolls are true collectors pieces, being bought for sometimes tens of thousands of dollars given their scarcity, and have been featured in dozens of art and culture magazines around the world.

On her page Victoria calls Facebook “philistines” for banning this image. Fair enough. There is certainly enough artistic merit for these not to be banned. And Facebook just continues to push back at what we are allowed to post on the site? Where does Facebook stop at what they choose to ban?

Or perhaps these are too explicit for public consumption. What do you think?

Asia is now the #1 and fastest growing region for Twitter; US down to just 25%... Facebook’s Nipplegate hits the front page
Scroll to top
This website or its third-party tools use cookies to improve user experience and track affiliate sales. To learn more about why we need to use cookies, please refer to the Privacy Policy.