Some more interesting insights from the UK OFCOM report (in addition to the shift in social networking activity from youths to adults I wrote about earlier today). 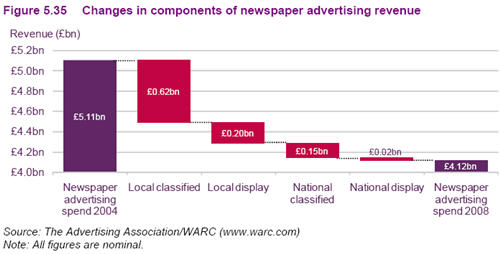 There has been a 25% slide in newspaper revenue over the four years to 2008 (with the biggest drop in 2008, and likely a larger one coming in 2009). Most interestingly, half of this loss has come from local classifieds.

UK has a distinctive structure to its newspaper market, with a number of national dailies mainly out of London, and a large variety of local newspapers. Classifieds by its nature tends to be a local market, so the national newspapers have in fact not taken the bulk of this revenue – this has been the province of the many local papers, which have been slammed by the fall in classifieds revenue. 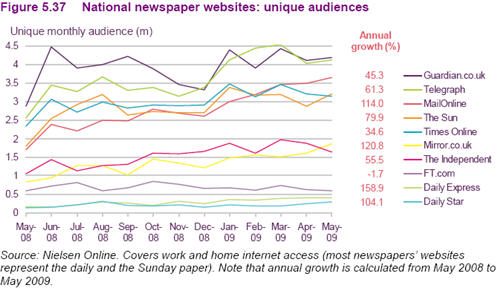 However the UK has had some highly successful online newspaper initiatives, notably from The Guardian and Daily Telegraph, as illustrated by this chart. This certainly will not replace lost offline revenues, however the best-performing newspapers online are becoming viable businesses in their own right.

Adults take over social networking, children bail out? Influence research: what drives people to Digg stories
Scroll to top
This website or its third-party tools use cookies to improve user experience and track affiliate sales. To learn more about why we need to use cookies, please refer to the Privacy Policy.