I’m in the process of preparing for an internal webinar to a global network of media specialists of a leading agency. I looked back at and updated one of the charts from my Seven Driving Forces Shaping Media framework, illustrating the shift in revenue and advertising models. 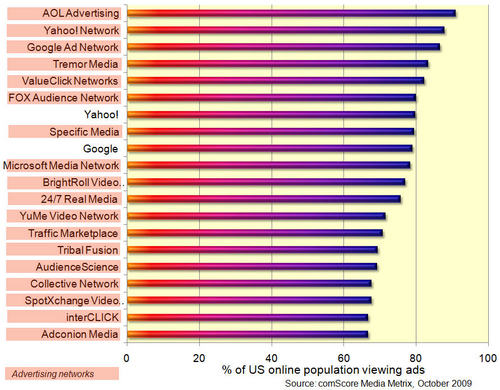 The headline news from this, of course, is that there are only two advertisers in the top 20 in terms of reach that are not ad networks: Yahoo!’s sites and Google. YouTube is 28th and Facebook 31st. In short, advertising aggregation is absolutely central to the advertising landscape.

The second thing to note is that since I last compiled this chart in April 2008, the dominance of the ad networks has substantially increased. While there are now only two sites present that are not ad networks, there used to be four. In addition, the reach of all the ad networks has substantially increased, with the 20th ranking site now having a reach of 67% of the US audience, compared to 47% just 18 months previously.

One of the key issues in the role of the ad networks is the downward pressure they place on pricing. Irrespective, and despite moves such as CBS Interactive’s dumping of all ad networks a few months ago, they are increasingly dominant. Media companies are still not able to find an effective replacement for the reach of the ad networks.

More on personal reputation systems – video interview of Travis Kalan... The latest country comparisons in that key economic driver: broadband speed
Scroll to top
This website or its third-party tools use cookies to improve user experience and track affiliate sales. To learn more about why we need to use cookies, please refer to the Privacy Policy.